The plan to wipe out Hitler and the rest of the Nazi leadership while they are watching a propaganda film in the theater owned by Shosanna/”Emmanuelle Mimieux” (Melanie Laurent) actually works! (Although it nearly goes south at multiple points along the way.)

Shoshanna shoots Pvt. Zoller (Daniel Bruhl) in the projectionist’s boost just prior to the fire being set by her lover Marcel (Jacky Ido); but before dying, Zoller shoots and kills Shoshanna.

Along the way, Bridget von Hammersmark (Diane Kruger) escapes the shootout in the basement (but Lt. Archie Hicox (Michael Fassbender) and Sgt. Hugo Stigletz (Til Schweiger) do not) only to be strangled by Col. Landa in the theater because she left a shoe behind and Lt. Donny Donowitz (Eli Roth) and Pfc. Omar Ulmer (Omar Doom) shoot up the crowded theater as the Nazi patrons try to flee the flames.

Donny gets to shoot Hitler’s face off (something we’d all wish we’d done) before the pair are blown up by the dynamite strapped to their legs as well as Raine’s bomb, which Landa hid in Hitler’s box. 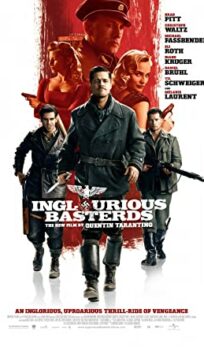