Young and determined Gladys Aylward (Ingrid Bergman), rejected by the London mission board as unqualified to be a missionary overseas, works as a maid to earn enough money to buy a ticket for herself to China. Once there, she helps an older missionary open an inn for passing mule trains, offering them a place to sleep “without fleas and with stories, which the Chinese love.” They share the Gospel with the muleteers this way.

Foot-binding has recently been outlawed and Gladys, re-named Jen-Ai, becomes the local “foot inspector” and eventually is loved and accepted by the village. She adopts several orphans.

Jen-Ai and a local army Colonel named Lin Nan (Curt Jurgens), himself half Chinese, half European, fall in love. Their village is bombed and many more children are orphaned, all of whom end up with Jen-Ai. As the Japanese invade and advance, Lin tells her to take the children and travel to a safer area. (It is unclear whether they see ever each other again.)

Even more orphans from a neighboring village’s orphanage show up and Jen-Ai must lead the whole group of children, nearly 100 of them, over several mountains and across the Yellow River. Despite lack of food, treacherous terrain and the advancing Japanese army, they survive the journey and arrive at a village where trucks are waiting to take them to safety. The mission board supervisor who had originally told her she was “unqualified” happens to be there and Jen-Ai introduces herself, “I used to be Gladys Aylward.” 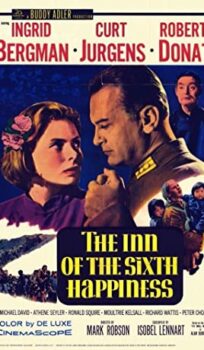