Short Version:
The opening and closing scenes are the exact same. In the end, we learn the man who beats Llewyn up is the husband of a woman he heckled the previous night. We never learn if Jean goes through with the abortion and Llewyn never meets his son in Ohio.

Long Version:
Llewyn Davis (portrayed by Oscar Issac) is a struggling 1960’s folk singer in NYC, venturing out into a solo career after his partner committed suicide. The film opens with Llewyn performing at the Gaslight Cafe, and being beaten up by a mysterious character in the back alley after the performance. Llewyn, who is homeless and spends each night on various friend’s couches, soon learns his friend Jean (Carey Mulligan) is pregnant, and she is not sure if the baby is Llewyn’s or the man she lives with, Jim (Justin Timberlake). When Llewyn goes to pay the doctor for an abortion, he learns the last girl he took in to get an abortion over two years ago never went through with it and that he has a child in Akron, Ohio.

Eventually, Llewyn records a song with Jim and another friend that’s implied to go on to become a hit. However, Llewyn forwent royalties on the song for a small upfront payment to pay for the abortion. After learning of his possible child in Akron, Llewyn joins two men on a road trip to Chicago in order to audition for a regular gig at a club. The club’s owner tells him he’d be better in a duo. Llewyn hitches a ride back to NYC. While driving, he notices an exit sign for Akron, Ohio, but Llewyn decides not to stop and to find his son.

Once back in NYC, Llewyn decides to quit music and go back to being a Merchant Marine. However, his license was thrown out with all of his old things by his sister. Unable to afford a new one, a distraught Llewyn visits the Gaslight Cafe again and talks to the owner, Poppi. When Poppi mentions he also had sex with Jean, Llewyn loses it and starts heckling an older lady who is currently performing for the first time. After a night of rest, Llewyn heads back to the Gaslight and apologizes to Poppi for his outburst. He performs a few songs, possibly indicating he has finally moved on from his partner’s death. As he leaves the club, a young Bob Dylan starts performing. Out in the back alley, the same scene from the opening takes place. We learn the man who beats him up is the husband of the lady he heckled the previous night. A bleeding Llewyn watches the man drive off in a taxi and says, “Au revoir”. 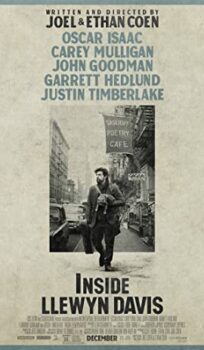