Husband, wife and 2 kids move into a new house.  The oldest son falls into a “coma” and after that, it seems as though the house is haunted.  The wife and mother-in-law see a ghoulish black figure with a red face at times in the house, as well as some other figures.  The mother-in-law has a psychic friend that comes to see the son and the house.  She determines that their son is not in a coma, but has “astral projected” in his sleep and has gone too far away from his body and is lost.  She essentially tells them that these demons from the beyond can use his body to come to the real world, so it is imperative that they bring their son back.  This is why the house seems haunted — the demons are trying to find the body of the son so they can come through him.

The husband finds out from this psychic that he could astral project as a child, and pictures of him as a child reveal an old lady from the beyond who was always around him trying to get to the real world through him.  The psychic made him lose all memory of this and prevented him from astral projecting anymore when he was a child.  She helps him project once more to bring his son back, who is being held hostage by the red-faced demon.  As the husband and son return to their bodies, the husband is distracted by the reflection of the old lady from his past in a window.  He yells at her to go away.  They then awake from their sleep, and all seems well until the psychic looks concerned when shaking the husbands hand.  The wife, mother-in-law, and son are in another room at this time.  The psychich snaps a quick picture of him, only to see not the husband, but the old lady in the photograph.  The old lady came back through the husbands body by distracting him while he was astral projecting.  He remains lost while she has come to the real world.  The husband (old lady) strangles the psychic as he sees what she has done, and the movie ends. 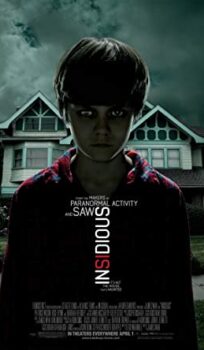