The second movie in the Divergent series.

POOPER
Tris passes all of the simulations and the box opens.  Inside is a message stating that the city was an experiment to see if humanity can continue to thrive, and the saviors of the world are Divergents.  By opening the box, everyone can now leave the city.  Jeanine orders the box buried and to kill Tris and Four.  The Factionless and Dauntless then arrive to arrest Jeanine, Max, and Caleb.  Four has the message played throughout the city, and all factions head to the walls.  Jeanine, in a jail cell, wonders what is behind the wall, but Evelyn says she will never find out and kills her.

LONG VERSION
Picking up shortly after the events of Divergent, outlaws Tris Prior (Shailene Woodley), her brother Caleb, Four (Theo James), his father Marcus, and their friend Peter (Miles Teller) are hiding out with the Amity, led by their leader Johanna (Octavia Spencer).  Meanwhile, the Erudite leader Jeanine (Kate Winslet) is broadcasting a message throughout the remains of the city of Chicago that Divergents were the reason for the shootout at the end of the first film and not a coup led by Erudite, and they are enemy of peace.  At the Prior home in Abnegation, Jeanine’s men, led by Eric (Jai Courtney), find a box that Jeanine believes to contain a message from the original city founders, and only a Divergent can unlock it.

Back at Amity, Tris tells the others that she wants to go back to Erudite and kill Jeanine, because she thinks it’s the only way to stop the killing of innocents.  Peter tells her it’s a bad idea, because it will just lead to getting Caleb killed, just like she got her parents killed.  She attacks Peter, and Johanna tells the group they are disruptive to their peaceful community and must leave.  Just then, Eric and Max (Mekhi Phifer), the corrupt leader of Dauntless, arrive to look for Divergents.  Tris, Four, and Caleb try to escape, but Peter turns on them and alerts Eric and Max to their location.  The trio are chased out of the community, and are able to escape by climbing on a passing cargo train.  Eric then takes Peter and Marcus into custody.

On the train, the trio meet a group of Factionless led by Edgar, who try to push them off of the train.  This leads to a fight where Caleb accidentally kills a Factionless.  Four then tells their leader that his actual name is Tobias Eaton, and Edgar orders the fighting to stop and has them taken to their leader.  Their leader is Evelyn (Naomi Watts), who is also Four’s mother.  She tells them that her plan is to unite the Factionless with the remaining Dauntless (hiding out with the Candor), and the combined forces will take out Jeanine.  Four, still angry at his mother for leaving him with his abusive father when he was a child, wants nothing to do with her or her plans.  The next day, they leave to meet up with their friends in Dauntless, but Caleb, still haunted by his killing of the Factionless person, chooses to leave Tris and goes back to Erudite.

Tris and Four arrive at Candor and are reunited with their friends, then are immediately arrested by Candor forces.  Their leader Jack (Daniel Dae Kim) says he must hand them over to Erudite for trial.  Four convinces him to let Candor hold the trial, since Jeanine would never allow them to live long enough to have one.  Jack doesn’t believe him but agrees to hold the trial, but then he tells them that part of the trial requires them to take truth serum.  On the stand and under the influence of the serum, Four says that he was originally going to quit Dauntless and join the Factionless until he fell in love with Tris.  Tris is fighting the serum, but reveals that she had no choice but to kill several of their friends, including their former classmate Will, which shocks the Dauntless.  Both are found not guilty for causing the shootout, but Tris is now being shunned by the Dauntless.

Back at Erudite, Jeanine is testing captured Divergents by running simulations on them to see if they can open the box, but all die in the attempt.  Jeanine then figures out that only someone who is a Divergent in all factions can open the box, and orders all Divergents to be scanned to see if any are 100% Divergent.  Peter then arrives, having joined with Erudite, and tells Jeanine that Tris will never be taken alive.  If you want to capture her, she will have to turn herself in, and the only way she will is to put pressure on her Abnegation side.  Meanwhile, Eric and Max arrive at Candor and begin looking for Divergents.  They shoot the Candor with a serum that reveals the Divergent percentage of anyone who is scanned.  If anyone comes up less than 100%, they are killed.  Just as Eric is about to kill a little girl, Tris attacks him.  Max then scans her and she comes up 100% Divergent, much to Eric’s dismay.  Four then shows up and kills Eric, but Max gets away.

The serum also control the minds of anyone who is not Divergent, and three Candor people are controlled to tell everyone that if Tris is not handed over, the killings will continue.  The three then are ordered to commit suicide, and Tris and Four are able to only save two of them.  That night, Four returns to Factionless and tells Evelyn he has changed his mind and Dauntless will join with the Factionless.  But Tris, now haunted by yet another death due to her, decides to turn herself in to Erudite, which she does the next day.  She is immediately taken to the simulation room, where Jeanine, now joined by Caleb, has her stuck with multiple wires.  Jeanine begins the simulations to open the box with the Dauntless simulation.  In this sim, Tris must rescue her mother from a burning building floating over the city.  She is eventually successful, and Jeanine then prepares the Candor sim.  But before it can begin, Four and the Dauntless break in and rescue Tris.  She has an opportunity to kill Peter in the process, but refuses to do so.  As they are escaping, Tris tells Four that she wishes she was never a Divergent, but then figures out that Four and the escape aren’t real.  The escape was part of the Candor sim, which she passes.  She also passed the Abnegation sim when she didn’t kill Peter.

Caleb, seeing Tris is getting exhausted, has Jeanine give her a break.  While being led back to her jail cell, she sees that Four has been captured.  After the break, Tris is hooked up again and the Erudite sim begins.  After passing the sim, there is an explosion, blowing Tris out of the building and she falls to the ground, which kills her for real.  An angry Jeanine says they will begin a new search for a 100% Divergent.  Peter then takes Tris’ body out and shows it to Four.  Just then, Tris sits up, and Peter begins to attack the guards, followed by Four.  Peter then tells Four and a now awake Tris that he rigged the sim to make it appear she was killed, and he had turned against the Erudite after seeing how Jeanine didn’t care that he was nearly killed by Tris.  But instead of escaping, Tris says that they need to get that box and the only way to open it is to complete the Amity sim.  Four then takes Tris back to the sim room and hooks her up, while Peter goes to the control room and begins the Amity sim.

In this sim, Tris must face her worst enemy: herself.  The fake-Tris is constantly goading the real-Tris to fight her and kill her because of her role in the deaths of her friends and family.  Tris refuses to give in, and passes the sim.  Just as a just arriving Max tries to kill Tris, Jeanine orders him to stop because the box is now open and a virtual message begins to play.  An unknown woman is speaking, and she says that the walled city formerly known as Chicago and the faction system are actually an experiment to see if humanity was ready to return to the real world.  The Divergents are not the enemy, but the saviors of humanity.  By seeing this message, that means there is a 100% Divergent person in the world and humanity can survive.  There is no more need for factions, and the people in the walled city can now leave and rejoin the rest of humanity living beyond the walls.

Jeanine, realizing that her power is now gone, orders the message to be ignored, the box to be buried, and to kill Tris and Four.  Just then, Dauntless and Factionless break in (this time for real) and capture Jeanine, Max, and Caleb.  Four has the message played throughout the city, and everybody begins heading towards the walls, and they now see Tris as a hero instead of an outlaw.  The movie ends with Jeanine, now in a jail cell, wondering to a visiting Evelyn what lays behind the walls.  Evelyn says that Jeanine will never know and shoots Jeanine to death. 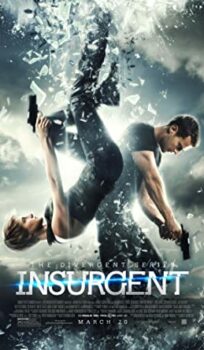