Christopher McCandless, after graduating from Emory University with honors, leaves his present life and family without a word. He has $24,500 in his savings which he gives away $24,000 of it to charity. He sets out on his journey to Alaska.

Chris assumes the name Alexander Supertramp. Along the way his car gets destroyed by a flash flood, he meets hippie tramps Rainey (Brian Dierker) and Jan (Catherine Keener) whom he helps fall back in love with one another, and moves on to meet wheat farmer Wayne (Vince Vaughn) who is arrested finally for selling fake satellite television hook ups. He then kayaks down the Colorado river into Mexico where he is stuck because he burned his Social Security Card and IDs. He hops on a freight train heading for the States. He meets back up with Rainey and Jan in “Slab City”(an abandoned military base where only concrete slabs are left and tramps have gathered to live). This is where he meets Tracy (Kristen Stewart). She likes him instantly but is only 16 so he tells her no and she is heartbroken.  He leaves, heading north, where he meets Ron (Hal Holbrook). Ron is a sad old man who takes a liking to Alex and even asks him to become his grandson. Alex has shown Ron that there is more to life and not to waste it by sitting around. He finally makes it to Alaska(we see him getting dropped off at the end of a dirt road, which is the first scene in the movie that we see). He hikes to a hippie looking bus he calls the “Magic Bus”. He fairs well there for a while but when he wants to leave the tiny river he crossed to get there is now a raging highway wide river that is impossible to cross. He starts to starve so he eats a bush that he thinks is a wild potato root.  The next morning he wakes up in excruciating pain and reads his wild plant book to find out that it was in fact a wild sweet pea that he ate and it is poisonous. He eventually dies in the magic bus from starvation because he could not eat from being poisoned.

The whole movie is being narrated by his sister Carine McCandless (Jena Malone) basically saying that he has to tell his story and this is the only way of doing it. Through out the movie Alex’s travels are flashbacks from the present where we see him in Alaska with the magic bus. He also keeps a journal through his adventures.

In the end of the movie we see a picture of the real Chris McCandless. It was a self portrait taken of him in front of the magic bus. The film was later developed when his body was found two weeks after he died by moose hunters.

“happiness is only real when shared” is his last writing. 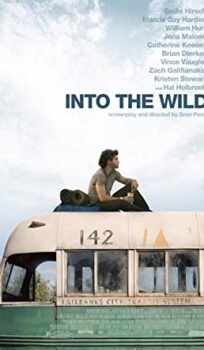