Submitted by Joy in Virginia

Everyone meets in the woods. The baker and his wife (James Corden and Emily Blunt) are childless because the ugly witch cursed their house, the baker’s father stole from her garden when his wife was pregnant with the baker’s sister, so the witch took the sister and raised her in a tower, that is Rapunzel. The witch (Meryl Streep) became ugly when the baker’s father also took some magic beans from her garden. She orders the baker and his wife to find a white cow, golden shoe, red cape, and yellow hair, then feed the items to the cow as the witch directs. Little Red Riding Hood (Lilla Crawford) goes to her grandmother’s and is eaten by the wolf (Johnny Depp). The baker, looking for the red cape, kills the wolf and saves Red and the grandmother. Jack (Daniel Huttlestone) takes his cow Milky White to market and the baker trades four magic beans for the cow. Cinderella (Anna Kendrick) goes to the ball but runs away from indecision three nights in a row, the baker’s wife trades shoes with her to get a golden shoe. The prince’s brother finds a tower with Rapunzel (Mackenzie Mauzy) and so does the baker’s wife, she takes some of her golden hair. The witch finds the prince going to Rapunzel, she makes him fall into thorns that blind him, then she puts

Rapunzel in the middle of a swamp. The baker and wife feed the cow the items. Jack milks the cow and the witch drinks the milk and turns young and beautiful. Immediately the baker’s wife becomes hugely pregnant. The baker’s wife has unknowingly lets the last magic bean fall on the ground and a new beanstalk grows in the woods.

Everyone is happy, the Prince found Cinderella, his brother found Rapunzel and her tears cured his blindness, the baker and his wife have a baby boy, Jack and his mother are rich, Red has a coat made from the wolf skin and a sharp knife from Granny. Everyone is at the palace celebrating the princes finding their princesses, Cinderella and Rapunzel, when the ground shakes. The Giant’s Wife has come down to find Jack and kill him. Everyone goes to the woods to look for Jack. Jack’s mother is killed by the palace Steward who wants to give Jack to the Giantess. The Baker’s Wife meets up with the Prince who charms her and kisses her, then she falls off a cliff and dies. Little Red Riding Hood’s grandmother’s home has been destroyed by the Giantess. After being rejected by Rapunzel, the witch falls into a tar pit and dies. The baker, Cinderella, Jack, and Little Red Riding Hood come up with a plan to lure the Giantess into the tar pit, Jack hits her with a sling, and the giantess dies. The baker is left with his baby boy, Cinderella leaves the prince and will help raise the baby, and Jack and Red will live with them too.

Note: In the stage play, there is a narrator character that the characters all kill halfway thru the play, that character is not in the movie. also in the play Rapunzel has twins and her prince never comes back, in the movie the prince finds Rapunzel and they ride off together. 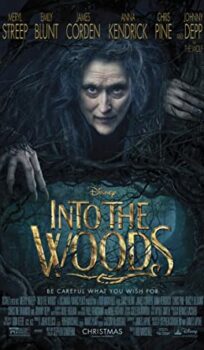