Pooper:
It turns out that John is actually Juan, who had repressed his memories about his criminal father, upon whom Hollowface was based. He manages to reach his daughter’s psyche and convince her that Hollowface can’t hurt her so long as her parents love her, and she comes out of her psychotic episode. Hollowface is seen fading out of existence, as he was always a figment of John (and his daughter’s) imagination.

Long Ending:
The movie begins many years ago with the story of a young boy, Juan, and his single mom, Luisa. Juan is plagued by nightmares of an entity called Hollowface, who seeks to steal Juan’s essence and face. Luisa does not believe him, until she herself is attacked by Hollowface.

We cut ahead a number of years to follow John Farrell (Clive Owen), who lives with his wife Susanna and daughter Mia (Ella Purnell). One day, Ella finds a box in a tree outside her house. In the box is the story of Hollowface, which she reads and then turns in at school as her own work. These actions seem to re-awaken Hollowface, who begins stalking her. Eventually, Hollowface attacks John, who installs security cameras in their house. After a second attack, the police review the tapes and see Mia and John struggling against an unseen figment of their imagination (only they can see Hollowface, Susanna does not see him). Further, Hollowface takes Mia’s mouth so she is unable to talk (her mouth is still there, but her voice is gone).

We cut back to Juan and Luisa. We see that Luisa has finally asked her local priest for help. He begins to pray over Juan, and Hollowface appears. Only Luisa and Juan can see Hollowface, and Luisa cuts the prayer-session short saying the Church can’t help her.

Returning to the present, Mia is now in a mental hospital. The psychiatrists state that there is a syndrome where two people can hallucinate the same vision and that is what is afflicting John and Mia. They believe that John leaving the family will help Mia recover. He is upset, but agrees to stay away. Susanna takes Mia home, and the psychiatrist gives her a shot that will wake Mia up if she has any more nightmares.

Flashing back, we see that Luisa and Juan have moved out of their apartment to another country. Luisa has married, and assures Juan that Hollowface will not find them there. Juan keeps having nightmares, but his stepdad insists that Juan comfort himself. Juan then writes a story of Hollowface and hides it in a tree, ending his nightmares. This is the story Mia found many years later that re-awakens Hollowface.

While John is alone at night, he thinks back to his youth. He then drives to visit his mother and tells her he remembers everything now. It turns out that Juan IS John and Mia’s grandma is Luisa, and that he simply changed his name and repressed his memories after writing the Hollowface story. He asks his mom about the truth of Hollowface. It turns out that John’s father was a violent criminal who went crazy in jail. When he was released, he tracked down John and tried to abduct him after assaulting his mother. Luisa managed to overcome John’s dad, and while his dad fled, John’s dad fell to his death. Young Juan, unable to cope with these events, created Hollowface and projected the entity onto his father. John realizes that the psychiatrists were right and that Mia’s delusions come from their shared imagination, and he rushes back home.

Meanwhile, Mia goes into a psychotic episode, where she envisions Hollowface kidnapping her and beginning to absorb her body and soul. Susanna injects her with the needle, but it has no effect. John bursts into the house and begins talking to Mia, telling her the end of the Hollowface story. He says that Hollowface never succeeds as long as the children are protected by their parent’s love. This brings Mia out of her psychotic state, and Hollowface fades out of existence. 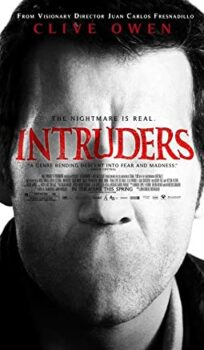