Invasion of the Body Snatchers(1978)

Miles (Kevin McCarthy) and Becky (Dana Wynter) try to escape Santa Mira, after the whole rest of the town is taken over by the pod people, who are preparing to spread to the rest of the United States.

Miles and Becky escape into a mine and Miles leaves Becky alone for a minute when he hears some music.  He returns and is horrified to find that Becky is now a pod person.

Miles runs in terror onto the highway and after seeing a truck with pods in it, he frantically tries to warn everybody about the invasion, ending with him saying “you’re next” right at the camera.

The original 1956 cut also features bookend scene added where Miles is describing the incident to a psychiatrist and the film ends with the psychiatrist calling the authorities after a crashed truck filled with pods was found.  This scene was removed in some later cuts of the film. 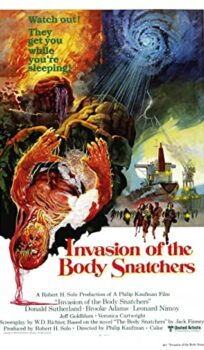