The movie starts with Esper Harte’s (Matt Farnsworth) father dying when his meth lab explodes. Esper’s father left him $200,000 in the will and it makes his mother Effie (Rosanna Arquette) very unhappy. She is sleeping with Sherrif Walker (Muse Watson), the county’s crooked cop. Esper and his girlfriend Donna Huffman love each other and meth a lot.

Sherrif Walker comes to Esper’s house and plans on planting meth on him so he goes to jail. Esper already has meth on him though and it is found while the drugs were being planted on him. He goes to jail and finds out the Sherrif is going to kill him so the mother can get the $200,000. While he’s in jail, the sherrif rapes Effie. Effie finds out she’s pregnant and doesn’t know who’s baby it is. Esper’s bailed out and him and his girlfriend start cooking meth. They plan to make enough money that they can get out of town. He eventually finds out about the rape and goes to the sherrif’s office to shoot him, but finds that his gun isn’t loaded. During this visit he finds out he will get none of the inheritance because his dad died with meth in his system.

While he’s gone, his best friend and partner Nick (David Backus) does too much meth and starts tweaking out bad. He walks into the bathroom while Effie is in there and halucinates that there is an aborted fetus in the toilet. Effie runs out and is scared. Nick comes after her with a knife. She burns his legs and crotch with Anhydrous. She falls to the ground from the fumes. Nick catches her. Esper comes home to Nick holding a knife to Effie’s neck. Esper gets to calm Nick down. Nick realizes what he’s doing and let’s Effie go. He then stabs himself in the throat with his knife.

Esper brings Effie home very high. Her father hasn’t seen her in weeks and he freaks out on Esper and tells him to get out of town or he will kill him. Esper goes home and steals his mom’s car. Effie packs a suitcase and sneaks out of the house. Esper picks her up and the two leave for Mexico. They throw the last of their meth out and plan to start a new life. 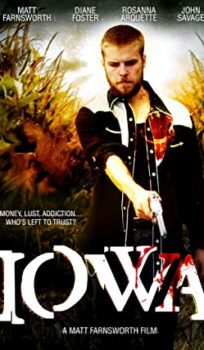