Tony uses his father’s model for “The City of Tomorrow” to create a new element to replace the palladium core of his chest arc reactor.

At the expo, Ivan Vanko (Mickey Rourke) takes control of the Hammerdrones and a Rhodey-manned War Machine to destroy Iron Man and the Stark expo. Pepper (Gwyneth Paltrow) exposes Justin Hammer to the police, and they take him into custody. Natalie/Black Widow (Scarlett Johansson) manages to infiltrate Hammer industries and relinquish control of the War Machine to Rhodey (Don Cheadle). He and Tony team up and destroy several Hammerdrones before being confronted by an iron-suited Vanko, complete with improved electric whips. Tony and Rhodey destroy his core arc by “crossing the streams” of their repulsor blasts. Vanko laughs as he reveals that his suit and all the fallen Hammerdrones are rigged to explode. Tony manages to save Pepper and get her to safety, where she resigns her position as CEO of Stark Industries, and then they kiss. Nick Fury informs Tony that Natalie gave Iron Man a go to join the Avenger Initiative, but not if it is piloted by Tony. Fury asks Tony to at least be a consultant.

In Washington, DC, Tony and Rhodey are given the congressional medals of honor by Senator Stern, who accidentally sticks Tony with the pin, concluding with the quip, “Funny how annoying a little prick can be.”

And after the credits roll, we find out from Agent Coulson that SHIELD has discovered Mjolnir in the desert. 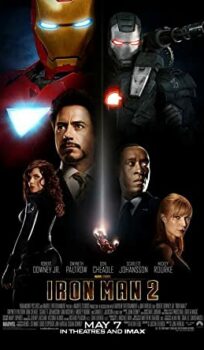