Submitted by Melissa and Alys

The world is under attack by an evil, America hating, terrorist called the Mandarin (Ben Kingsley).

Iron Man (Robert Downey Jr.) is suffering horrible panic attacks after what happened to him in the Avengers.

Happy (Jon Favreau) is blown up, but not killed by one of Mandarins henchmen.

Tony invites the Mandarin to confront him face to face and gives him his address over broadcast news. The terrorist responds by blowing up Tony Stark’s house with Pepper (Gwyneth Paltrow) and Tony inside. Pepper thinks Tony is dead; however, he actually escaped and is hiding out in a tiny mid-west town.

Pepper is kidnapped and injected with the drug that has been turning people into human bombs. Tony follows leads and finds that the Mandarin is actually just an actor who was paid to be the face of the bad guy in exchange for drugs, gifts and money.The actual bad guy is Aldrich Killian (Guy Pearce), a drug manufacturer. He has been using the “terrorist claims” by the Mandarin to cover up the fact that the super soldier drug he is developing for the DOD has a really bad side effect.

The end of the movie is about Tony evolving. He kills Mandarin, Pepper is saved and they are still together, Tony has a surgery to have the shrapnel removed from his heart, and he throws away the core that used to keep him alive. He recovers Jarvis from the wreckage of his old house and goes to build a new home.

Happy wakes up from his coma and Ben Kingsley goes to jail.

Evan adds this post-credits scene: We see Tony on a couch talking out his anxiety issues. The camera then reveals a snoozing Bruce Banner aka the Hulk (cameo by Mark Ruffalo). When Banner wakes up, he apologizes for dozing off, noting he is not a therapist. Undeterred, Tony continues talking about his life story as Banner nods off again. 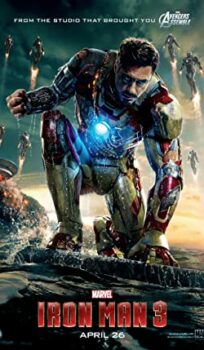