Orphaned Jillionaire genius playboy and war-industrialist Tony Stark (Robery Downey Jr.) is injured when captured by a terrorist type group in Afghanistan. They want him to use parts of his missles to build a reproduction of his own company’s newest missle. He (instead) uses parts of his own weapons to a. create a power device to attach to his chest (injured heart) to keep shrapnel out (his weakness) and b.) create a proto-type Ironman suit to escape his captors.

He then escapes – returns to the USA with a change of heart (as it were) – to no longer make weapons. Intrigued he secretly re-builds the Iron-man suit (very cool) – and returns to Afghanistan to defend a village. He then determines there is double dealing – as use of his own Stark weapons is still going on back in Afghanistan.

Obadiah Stane (Jeff Bridges) -his long time friend and mentor (and friend of his father) as it turns out attempts to lock Tony out of his own company. Along the way – we determine the following – Stane set Stark up and he was suppose to be killed in the first place – and Stane gets the drawings/plans and prototype suit from the terrorists in Afghanistan. Then kills them all. Then he has his own version of an Ironman suit built in secret.

Stark figures somethings up – and sends Pepper Potts (Gwyneth Paltrow) to retrieve data from the computers at the company. She learns about where the weapons are going – but also stumbles onto the secret iron man project.

There is lots of action around all this – and big battle between Iron Man and Stane (Iron Monger) – we also get to see Terrence Howard say “next time” when he looks at the other suit in Tony’s lab (War Machine).

Tony lives – Stane dies – Tony hooks up with ‘S.H.E.I.L.D’ who helps cover things up with a press conference however, the irrepressable Stark can’t help himself, he says “I am Ironman” (last line).

We cut back to Tony Stark coming home and calling out for his computer, only to catch sight of a figure in his living room facing the balcony glass window, looking out toward the ocean/horizon. The figure questions if Tony thinks he’s the only superhero, he slowly turns around (and we see it’s Samuel L.Jackson) stating that Tony has now entered a bigger world! Tony asks who he is and is informed that he is speaking to Nick Fury; Director of S.H.I.E.L.D and that he is here to talk about the “Avenger Initiative” 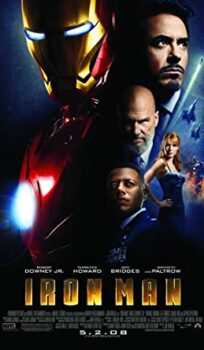