Natalie (Rebel Wilson) comes to realize that she should’ve given Josh (Adam DeVine) a chance. After seeing that Blake (Liam Hemsworth) was not the one and that he was actually vapid and shallow, she rushes to the Church where Josh and Isabella (Priyanka Chopra) are getting married with the intention of stopping the wedding. It is here that she understands the first person she needed to love was herself, so then she would be able to embrace good things in her life. She walks off and takes the “Just Married” convertible set for the couple to drive away; but then, she has a head-on collision and finds herself in the hospital…

BACK IN HER NON-ROMANTIC REALITY; where everything is grim and as she would expect it to be. A Doctor tells her she was in a medically-induced coma for 18 hours, due to her injury from the mugging attempt earlier in the film. She goes home and even gives her neighbour Donny (Brandon Scott Jones) -who is really gay, a drug dealer and has a boyfriend- a hug, thanking him for “his support”.

At work, Natalie stands up to those who would just want to treat her like an errand girl -including her assistant Whitney (Betty Gilpin), to whom she warns to cut down on watching movies at work- and passionately presents, at the day’s conference, a project that calls everyone’s attention, including Blake. And, of course, she and Josh finally admit their feelings for each other and kiss, after which -in a very clichéd romantic fashion- she takes the elevator to go get a coffee.

The movie ends with a catchy rendition of “Express Yourself”, sung and danced by the main cast. 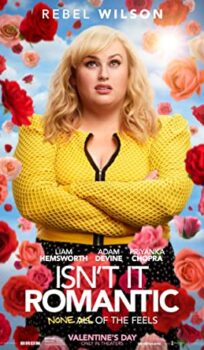