After the giant octopus enters San Francisco Bay and starts battering a few nearby areas on land, Pete (Kenneth Tobey) and John (Donald Curtis) head out in a Navy submarine armed with a jet-propelled atomic torpedo, which they plan to shoot into its head and then detonate to kill it.

After the Army drives the octopus back into the water with flamethrowers, the submarine launches the torpedo, and it gets stuck in the creature’s head as planned. However, the submarine gets too close to the creature in the process, and it grabs hold of it. Using an aqualung, Pete exits the submarine and attempts to make the octopus relinquish its grip by detonating plastic explosives on the tentacle holding the sub, but the explosives have no effect, and the force of the blast knocks Pete out.

John then goes out after Pete armed with a harpoon gun, and after finding and checking on him, he goes up to the octopus’s head and shoots it in one of its eyes, which makes it let go of the submarine. John then awakens Pete, and they swim away from the scene like crazy. As the octopus starts making its way out to open water, the torpedo is detonated, blowing it to bits. Pete and John are rescued a short time later.

As Pete, John, and Lesley (Faith Domergue) are out celebrating their victory, Lesley agrees to continue seeing Pete after she and John finish their upcoming research project in Cairo. 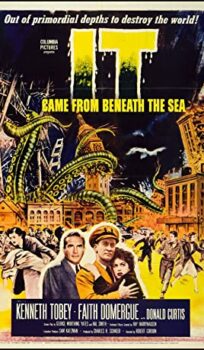