It looks like a meteor has crashed in the Arizona desert.  Amateur astronomer and science fiction writer John Putnam (Richard Carlson) investigates and finds an alien space craft has crash landed.  He tells the people in town, but the sheriff and newspaper ridicule him.  The telephone line repair crew, Frank and George (Russell Johnson), go missing.  They reappear, but are behaving very odd.  Additional people go missing, and then return with strange behavior.  There are robberies in several stores of electrical equipment.

Putnam returns to the spaceship and communicates with the aliens.  They inform him that they crashed accidentally and just want to repair their ship and leave.  They are controlling the minds of the townsfolk to get supplies and perform repairs.  By now, the sheriff (Charles Drake) realizes something is up.  He enlists a large posse to attack the aliens.  When Frank refuses to respond normally to them, they shoot, killing the alien that is controlling Frank.  Putnam tries to convince the sheriff to leave them alone, that they just want to repair their ship and leave.  The sheriff refuses to listen.

Putnam creates a rock slide to block the posse.  They can not reach the ship.  The aliens complete repairs, release all the people and leave.  However, Putnam tells the people, ” It wasn’t the right time for us to meet. But there’ll be other nights, other stars for us to watch. They’ll be back.” 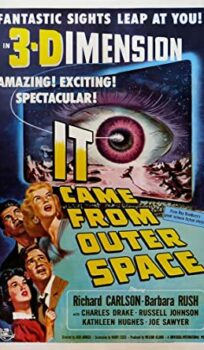