Charlie (Nicolas Cage) and Yvonne (Bridget Fonda), after winning their shared lottery ticket of $4 million, go out and do many philanthropic endeavors together, much to Charlie’s wife Muriel’s (Rosie Perez) disgust as she at first wants Yvonne to have none of the earnings and then soon wishes to keep the earnings all to herself. Eventually, Muriel has enough and decides to divorce Charlie, and she decides to take him to trial to get all of their lottery winnings. However, she not only wants her husband’s share of their winnings, but Yvonne’s winnings as well. After a rather farcical trial that paints Yvonne and Charlie in a negative light, Muriel wins the case. Yvonne runs out of the courtroom in despair, and Charlie runs after her.

They don’t talk for a few days, and Charlie, wanting to find her, goes to the coffee shop where Yvonne works, and finds her there. Though she tells him she felt like she ruined his life, Charlie tells her that she did not and that the last few days without her were horrible, like he was missing half of himself. He says he didn’t care about the money, but for her, and the two reconcile. They then feed a bum off the streets a bowl of soup, and while he is eating they dance together and talk about leaving New York City, which they decide to do, and the two kiss. The bum is then shown taking pics with a small camera attached to his wrist, and after leaving the store he removes his bum disguise and leaves in a New York Post van. In a voiceover, he introduces himself as Angel Dupree (Isaac Hayes) of the New York Post, the black man who had been following the two around throughout the movie. He gets a story out to the people about how they gave him a bowl of soup, as well as some money from their own pockets, wishing it could be more.

When Charlie and Yvonne finish packing their things up for their departure, they head back to the coffee shop to close it up. They open the door to find hundreds of letters with money donated by people around New York City to them for their philanthropist ways, based on Angel’s coverage of them. It took them 3 days to open all their mail, and when they were done, New York had given them $600,000. Charlie went back to the police force, and Yvonne got her coffee shop back. Yvonne’s actor ex-husband Eddie (Stanley Tucci) could only find work driving a cab, and Muriel married Jack Gross (Seymour Cassel), who eventually cleaned out their chequing account and fled the country. Muriel soon went to live in the Bronx with her mother and work in a nail salon.

The last scene shows Charlie and Yvonne, now married, riding in a hot air balloon with a “Cop Weds Waitress” front page pic from the New York Post adorned on it, dropping some sort of pink leaflets onto the ground below. 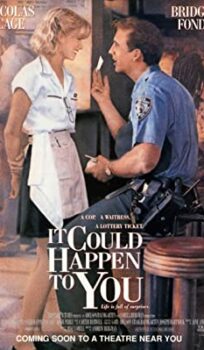