Lenore Davis (Sharon Ferrel) is pregnant with Frank’s (John P. Ryan) second child, and she is on her due date.  What would have been a happy moment was ruined horrifically when Frank finds one of the doctors collapsed dead outside the delivery room. When he looked inside to see what was the commotion he sees the other doctor’s and nurses dead in a pool of blood with Lenore still strapped to the bed shouting hysterical about her baby. At first Frank assumed that somebody killed the doctors and stole their newborn, but that was corrected by Police Lieutenant Perkins (James Dixon) and another doctor (Shamus Locke) who deduce that not only did the baby kill the doctors, but he is also a deformed mutant with sharp teeth and claws.

There is a bit of speculation of why there was such a mutation and university scientists decide that after the police find and kill it, they want to study it. However, the executive of a popular fertility drug company wants the baby destroyed beyond evidential study in fear that the mutation may have been caused by the drugs they manufactured.  The executive orders the doctor to carry out that job in return for a position in research and development.

The baby on the other hand, is trying to search for his family and kill those on the way that scare him. It first kills a girl, then a musician, then a milkman and finally a schoolteacher at the very school Frank’s son Chris (Daniel Holzemen) goes to.

The police, Frank and Perkins look for him there and it kills one of the cops before it escapes again.  The baby manages to make it home and Lenore who’s lost her sanity sometime after the murders, hides it in the basement, hoping that neither Frank nor the cops would kill it.

At the same time, Chris sneaks back home from Charley’s house that he was to stay at so the baby wouldn’t harm him. He finally meets the baby and calms it down by promising to protect it and surprisingly the baby doesn’t attack him.

Frank finds the baby and shoots it wounding it and causing it to run away, but not without killing Charley in the process.  The police arrive and Perkins; knowing that Frank wants to be the one to do it, hands Frank a rifle so he can kill the baby if he finds it.

They figure out that the baby was traveling through the sewer system so the police and Frank, occupy that.  Frank finds the baby and being the father, couldn’t bring himself to do it. Instead he wraps the baby up in his Trench coat and tries to avoid the cops.  Frank manages to get out of the sewer but is surrounded by the cops, Perkins, and the doctor.  Perkins pleads to Frank to drop the baby so the cops can kill it without killing Frank. Frank pleads back to let it live, lock it up and study it. Perkins still pleads to Frank to drop the baby while the other cops are more willing to kill them both, and the doctor wants it destroyed. Frank loses his grip on the baby and it attacks the doctor causing the cops to open fire. The baby is dead but as a result the doctor was accidentally shot to death too.

When all is over Frank and Lenore sit in the squad car so they can go home. Unfortunately Perkins gets a call that they found another one in Seattle. 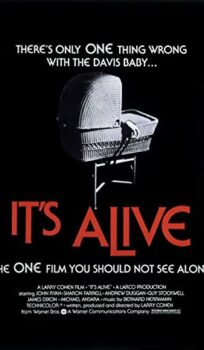