After going almost completely deaf, superstar DJ Frankie Wilde (Paul Kaye) is recording his new album, when one of his friends smashes a guitar into an amp in frustration. The resulting feedback leaves Frankie completely deaf, shortly after which his wife Sonja (Kate Magowan) leaves him for his friend, DJ Blink (Steve Oram). Frankie becomes a hermit for a year, giving his ears a rest and consuming nothing but drugs and fast food. After trying to commit suicide by tying roman candles to his head and then realizing that he wants to live, Frankie cleans up and learns to read lips from Penelope (Beatriz Batarda), whom he also falls in love with.

Frankie eventually figures out how to DJ / produce again, by attaching his feat to a pair of monitor speakers and feeling the rhythms he cannot hear. His new album, “Hear No Evil,” is successful, and he makes his return to DJing with an acclaimed gig at the Pacha club. After this, he and Penelope disappear, leaving his sleazy manager, Max (Mike Wilmot), dumbfounded. As the movie closes, talking heads discuss rumors of where Frankie is, while we are shown that Frankie and Penelope have a child, and Frankie is shown teaching deaf children to appreciate music like he has.

(Note: While the character of Frankie is fictional, as are a number of the other central characters, many of the DJs interviewed are real and famous, giving the “mockumentary” a humorous sense of authenticity. Also, the title refers to British slang, where “Pete Tong” means “wrong.” Pete Tong is also radio DJ). 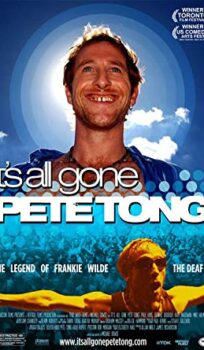