After Jack (Voice of Masachika Ichimura) is told in song by his otherwise silent dog Crosby, to be brave, and not just settle for the gold he had stolen from the Cloud Kingdom’s treasure room, Jack climbs back up the beanstalk to rescue Princess Margaret (Voice of Linda Yamamoto) from marrying the evil giant, Tulip (Voice of Hiroshi Mizushima).

Upon returning back to the treasure room, he coerces the vain Talking Harp (Voice of Nobue Ichitani) into telling him how the hypnotic spell Tulip’s mother, the witch Madame Noir (Voice of Kirin Kiki) put over the Princess can be broken. The harp informs Jack that only someone truly brave may break the spell by giving the Princess a kiss. At the wedding chapel in the kingdom, Margaret is about to say her vows, when Jack suddenly breaks through one of the stained glass windows and abrubtly rushes up to Margaret and kisses her. The spell is undone, and a furious Madame Noir orders Tulip to destroy the two.

Jack and Margaret make their escape and hide in the bottom of a well, where they share a sweet moment together, until Tulip finds them and attempts to skewer them with a spear, only to have the weapon pierce the bottom of the well which sends a gush of water upwards, allowing Jack and Margaret to flee once again, only to run right into the sight of Madame Noir! She transforms the solid ground they’re standing on into an interdemensional plane. Tulip arrives and Madame Noir harshly orders him to stomp on Jack and Margaret. However, Tulip, who is tired of his mother’s nagging, crushes her instead! The spell over the kingdom now broken, the building is now restored to it’s former beauty, and the royal court are turned from mice back into humans. Upon Tulip moving his foot away, it is revealed that Madame Noir’s insides are bizarrely mechanical like the musical toy of her he had crushed earlier.

Jack attempts to lead Margaret back down the beanstalk with Crosby and he, but the Princess refuses, stating that since her parents are gone, she must now carry the responsibility of ruling the Kingdom. Jack, although initially hurt, comes to accept this and bids her farewell, promising to visit her again one day. Tulip then appears again and Jack angers him in order to lure him down the beanstalk and away from the kingdom. Upon reaching his home, Jack begins to chop down the beanstalk, but suddenly realizes doing so would mean he would never again be able to return to the Kingdom. Having no choice, Jack continues to chop. The beanstalk loses its magical properties and shrinks and withers away, causing Tulip to lose his grip and fall to his death.

The next morning, Jack rushes out of his house to catch breakfast just as he had done at the beginning of the film. He notices Crosby looking to the sky with in a forlorn manner, he concurs that he also misses the Princess, and that he hopes she is happy. The two then rush off to the woods as the camera pans up to the clouds in the sky. 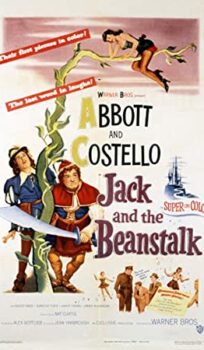