Jack Brooks (Trevor Matthews) watched his family be eaten alive by a monster on a camping trip when he was very young.  Since then he has had an anger management problem.  He occasionally visits Dr. Silverstein (Daniel Kash) but that doesn’t seem to help.

The monster of this movie is a black heart which was awakened in the backyard of Professor Crowley’s place.  The heart forces it’s way down Crowley’s throat.  Crowley slowly transforms into a Jabba-the-Hut monster with tentacles for dragging victims into the extending mouth.  The victims get turned into killing zombies.

The showdown is set in the closed off high school.  Jack runs away at first but gets angry and loads up with his plumber gear to kill the monster and zombies.  At the end of the carnage a few students survive including the lovely Kristy (Ashley Bryant), whom Jack has the obligatory passionate ‘after slaying the monster and rescuing the girl’ kiss.

The film ends where it started with Jack in a tribal village which is being attacked by a monster.  Jack musters up his anger and kills the monster. 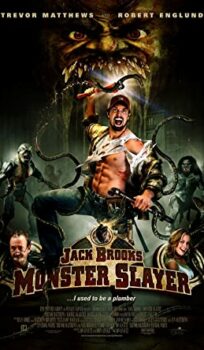