Jack Ryan (Chris Pine) is a grad student in London when the events of 9/11 change everything. He joins the Marines and is shown 18 months later in a helicopter, getting shot down over Afghanistan. His actions before the crash save his buddies but his injuries take many months to heal, including re-learning how to walk. His 3rd-year med student doing a physical therapy rotation is Cathy Muller (Keira Knightley).

Watching his recovery is a CIA spook named Harper (Kevin Costner), who eventually recruits Ryan to work openly on Wall Street, while covertly monitoring transactions for patterns indicating terrorist connections. Ten years pass, and Ryan has asked Dr. Muller to marry him; she is hesitant but is living with him.

When Ryan finds huge amounts of money propping up the US economy and being hidden by a Russian firm, he goes to Moscow for an audit. Viktor Cherevin (director Kenneth Branagh) thwarts the audit by ostensibly selling off all of the shell companies. Ryan’s analysis makes him suspect that Cherevin’s plan is a terror attack combined with a massive sell-off, which would destroy the US economy permanently. Attempts on Ryan’s life force him to contact Harper for assistance and Ryan reluctantly becomes a CIA field operative out of necessity.

Cathy suspects Ryan of having an affair, so she surprises him at the Moscow hotel and he is forced to reveal the truth about who he works for. She is relieved and cooperates in distracting Cherevin while Ryan downloads the incriminating data needed to uncover the planned attack. She is held hostage by Cherevin for a time before Ryan is able to free her.

Harper and Ryan are able to piece together the clues and determine that Cherevin’s son Aleksandr, long thought to be dead, is actually alive in the US and is planning to detonate a vehicle loaded with bombs below Wall Street. Ryan spots the vehicle, and is able to drive the van into the river where the explosion does minimal harm (but kills Aleksandr).

Cherevin is killed by the politician who directed his efforts, since he failed to collapse the US economy. Ryan is shown (now wearing a wedding band) being introduced by Harper to the president in the Oval Office. 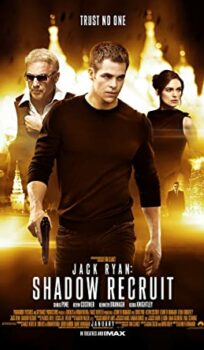