Roderick (Stanley) Tucci is evil- he stole both the magic beans and the magic crown from the tomb of King Erik. Whoever possesses the crown can order the giants to do his bidding. Roderick plans to plant a bean, create a beanstalk to the giants’ home in the sky, climb the beanstalk and use the crown to command the giants to help him conquer the Earth.

Jack (Nicholas Hoult) rescues Princess Isabelle (Eleanor Tomlinson) from the giants, and takes her down the beanstalk to Earth. The knight Elmont (Ewan MacGregor) stays behind and kills Roderick. The people back in England chop down the beanstalk, which collapses. Jack, Isabelle and Elmont survive, and all seems well. The king (Ian McShane) gives Jack a large monetary reward), and heads back to the castle with Isabelle and his soldiers.

However, the two-headed giant Fallon (played by Bill Nighy and John Kassir) finds Roderick’s beans and his crown. Fallon wears the crown on this finger like a ring, making him absolute ruller of the giants. He uses the beans to grow new beanstalks that the giants can climb down to England.

Jack sees the giants coming and rides to warn the king and his men of the invasion. The onrushing giants kill a few of the soldiers, but the king, Jack, Isabelle and most of the army make it back to the castle. The giants lay siege to tha castle, while Fallon manages to get inside the castle by swimming through the moat to a hidden entrance.Fallon captures both Isabelle and Jack, and is about to eat them, when Jack finds one last magic bean. He drops the bean down Fallon’s throat. Immediately, a huge beanstalk grows inside Fallon’s body, which kills him.

Jack then takes the crown, which gives him the power to send the giants away, back to their home in the sky. The last beanstalk is chopped down, and the giants can never return to Earth.

Jack marries Isabelle, and tells the story of his heroics to his children. Over the centuries, the story is told and re-told, changiung along the way, until it became the fairy tale we know as “Jack and the Beanstalk.

And, over the centuries, the magic crown was altered and re-altered. In the final scene, we see modern-day kids talking a tour of the Tower of London, and viewing the magic crown on display with the Crown Jewels. 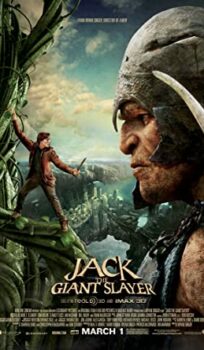