Centipede isn’t really the explorer he claimed to be; he’s only seen the world in pictures of the National Geographic. This is discovered when they go off course and end up in the arctic. Centipede dives into the water to get a compass; Miss Spider and James go after him. After battling an undead army of pirates, they escape back to the peach and get back on course.

They arrive at New York City, but their joy is short-lived when a storm brews up with the rhino (one killed James’ parents). James braves his fear and the rhino disappears, but not before it severs the silk threads attached to the seagulls and sending the peach plummeting, separating James from the insects.

James coughs up the crocodile tongue he unknowingly ate earlier and returns to live action normal form. The police and fire department rescue him using a large crane to retrieve the peach from where it was impaled atop the Empire State Building. A beat-up car pulls up (apparently having driven across the ocean floor?) and out climb Aunt Sponge and Aunt Spiker who try to talk the police into handing Jim over to them. James tells everyone how his aunts mistreated him. The insects return and reunite with James. With Miss Spider’s silk, they wrap up the two aunts up tightly. Spiker and Sponge are taken away by the police.

James shares the peach with everyone who eats it down to the pit and set it up in Central Park as a permanent home. The narrator who is revealed to be the man who gave James the crocodile tongues tells us that James, “who was once the saddest and loneliest little boy you could find now had a loving new family and all the friends in the world.” When everyone  asks Jim to tell his story again, he wishes for a way to share it with everyone. The narrator concludes with “and that is exactly what you have just seen!”

Before the credits, through newspaper headlines, we learn that Centipede is running for mayor, Old Green Grasshopper joins an orchestra, Earthworm becomes a model for skin lotion, Mrs. Ladybug becomes a nurse and delivers 1000 babies, Miss Spider opens her own nightclub, and the glow worm becomes the light in the torch of Lady Liberty. The final headline shows the party and insects throwing James a birthday party.

After the credits, there is a short montage of a game involving a rhino hitting two mannequins who look just like Spiker and Sponge. 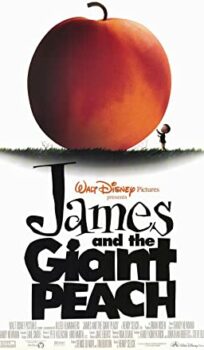