There are at least 14 filmed versions of the story — more than any other novel in history.  The best version is the BBC production available on DVD starring Zelah Clark as Jane and Timothy Dalton as Rochester from 1983.

Rochester is still married to Bertha, the madwoman hidden in the upstairs room… but…

Jane and Rochester’s wedding is interrupted by the announcement from a stranger that Rochester he is already married.  As Rochester confesses the truth, he drags Jane and the rest of the wedding party up to the attic, where Jane discovers that the strange noises, the odd laughter, and the dangerous attacks on Rochester and Richard Mason, are not from Grace Poole the drunken housekeeper, but actually Bertha Mason, Rochester’s first wife, a violent madwoman housed in the attic, and Grace is her attendant.

Jane is devastated, and despite pleas of love from Rochester, and the promise they will live in a far away home where no one will know they are not truly married, Jane, despite her love for him, sneaks off in the middle of the night — leaving with only the clothes on her back.

Jane nearly dies from exposure, then is rescued by St. John (pronounced sin-jin) a missionary and his two sisters.

Jane hides her identity as Rochester searches in vain for her.  A year passes, and Jane admits her true self to St. John’s family, gains a rich inheritance from a dead uncle, and learns to her delight that St. John and his sisters are her cousins, her only living family.  She gladly shares the inheritance equally among her cousins.  Subsequently, Jane is offered a loveless marriage by the handsome St. John so they can travel to India together as missionaries.  After declining him, Jane hears her name over the wind — it is Rochester calling out to her in desperation.

With a cry of “Wait for me!” Jane rushes back to Thornfield to discover it a burned ruin. Fearful for Rochester’s life, she learns from a local that Bertha set fire to the mansion shortly after Jane’s departure a year previously, and although Rochester made valiant efforts to save his wife, she threw herself off the roof to her death, and Rochester was gravely wounded as the house collapsed on top of him.

Traveling to the small home Rochester owned a few miles away, Jane finds a broken and blind Rochester.  After initially pretending she would be happy to become “like a sister” to him and nurse him back to health, Rochester boldly confesses the fact that he wants her for his wife, and she happily agrees.

The epilogue voice-over states they have now been married ten years, and Rochester regained the sight in one eye upon the birth of their first son. 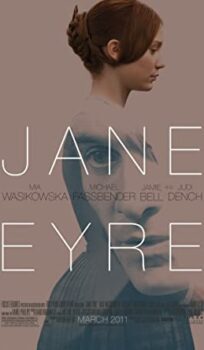