Sniper Anthony Swofford (Jake Gyllenhal) and his spotter Allen Troy (Peter Sarsgaard) become friends while going through the rigors of boot camp, and are eventually shipped off to Iraq into Operation Desert Shield/Desert Storm. It is revealed to “Swoff” by Sgt. Sykes (Jamie Foxx) that Allen has been kicked out of the Marines pending the end of his tour in Iraq for lying about his criminal record on the entrance forms. When they are finally given an opportunity to take out an enemy target, they are stopped just before the shot is taken because of an airstrike that is called into the area where the target lies. Allen breaks down in the frustration of this event, and they return to their camp where they find the Operation has ended. They are then shiped home, and it is revealed that months later Allen killed himself obviously out of the disappointment of his time in the war as well as his ejection from the Marine Corps. 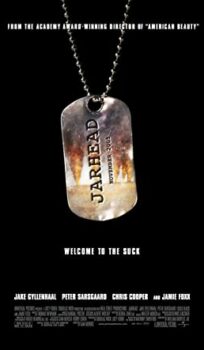