Jason (Todd Armstrong) is the rightful heir to the throne of Thessaly but Pelias will do anything to keep Jason from becoming king.  He tells Jason to find the Golden Fleece to bring back to Thessaly and claim the throne. Unbeknownst to Jason, Pelias is the man who killed his family and wants him dead as well.  Jason recruits the mighty Argonauts, including Hercules, through battles of strength and wit and they set sail on the ship Argon to Colchis, where it is rumored the fleece is.  The goddess Hera is watching over Jason but can only help him five times and he uses those wishes to help them during the voyage.  At one point while resting and gathering supplies, Hercules and another crewman anger the island god Talos who attacks them and almost destroys their ship. Hera helps Jason find the weakness in Talos’ armor and they defeat him, but Hercules stays behind on the island in hopes of finding one the crew who was believed to be killed by Talos.

Finally, Jason exhausts all of Hera’s help but they make it to Colchis where a priestess named Medea helps them find the fleece and falls in love with Jason.  Jason manages to capture the fleece and even uses it to heal Medea when she is shot with an arrow. While they suffer some losses, the crew largely escapes and sets sail back to Thessaly.  The gods decide to stop “playing” with Jason for a while and let him enjoy his time with new love Medea.  They leave it wide open for Jason to continue his adventures. 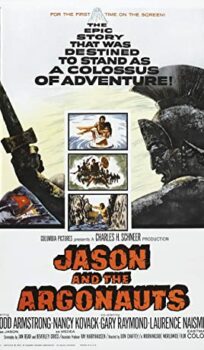