CIA Director Dewey (Tommy Lee Jones) is working with a Silicon Valley company called Deep Dream headed by Aaron Kalloor (Riz Ahmed). Kalloor is giving Dewey a back door into his website to allow mass surveillance on the world, but Kalloor has a crisis of conscience and threatens to out the deal at a Las Vegas tech conference.

Dewey arranges for an Asset (Vincent Cassel) to execute Kalloor at the conference. Heather Lee (Alicia Vikander) informs Jason Bourne (Matt Damon) of the plot and with Lee’s help, Bourne interrupts the shooting.

Bourne confronts Dewey, who is killed by Lee. Bourne chases after the Asset and snaps his neck in a storm drain.

Lee meets with the CIA and convinces them that she can bring Bourne into the agency and if she can’t, Bourne should be killed. She meets Bourne in a park and asks him to come in, and he says he’ll think about it. When Lee returns to her car, there is a recording inside of the conversation she just had with the CIA, proving that Bourne knows of her deal. 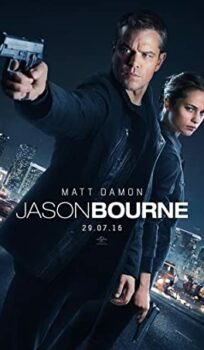