SHORT VERSION:
The Jetsons and their new friends find out that the sprocket plant is being sabotaged by the Grungees, a race of cute little aliens who live within the asteroid, and they are doing it because the mining is destroying their town.

Spacely shows up at the plant when it is shut down, and – determined to get his millionth sprocket – he starts up the machines while the Jetsons and company are still in the Grungee community. They and the Grungees manage to avoid getting killed and get up into the plant, and George shuts down the machines himself. George then questions Spacely if he knew that the Grungees lived in the asteroid before he started mining it, and Spacely admits that he did, but he dismissed them as inconsequential. George makes a deal with him to let the Grungees run the plant, where they will make and sell to him new sprockets by recycling old ones.

The arrangement works, and Spacely gets his millionth sprocket and ends up deciding to keep George on as a vice-president (but without a raise). However, with the Grungees now running the plant, the Jetsons no longer need to stay on the asteroid, so they return to their old life on Earth. As they leave, the pass over the factory, and they see the Grungees on the roof arranging themselves to form the words “Thanks George.”

LONG VERSION:
After another sabotage at the sprocket plant, Rudy-2 informs George that these sabotages have been occurring ever since the plant first opened, and Spacely has already gone through four vice-presidents because of them. Refusing to be intimidated, George decides to stay in the plant overnight and catch the saboteurs red-handed. Elroy, Astro, Teddy-2, and Fergie overhear this, and Elroy decides to get his detective kit and secretly aid his father. Teddy-2 ends up coming along, since he knows the layout of the plant, but Elroy tells Astro and Fergie to stay behind, the former so he could look after his mother. Fergie ends up following them without their knowledge.

George ends up falling asleep during his watch and gets kidnapped by the saboteurs. Rudy-2 stops by to check on George and only finds his flashlight, so he goes to the Jetsons’ home and tells Jane about it. Astro then voices his concern for Elroy and Teddy-2, and admits to Jane that they have gone to the plant themselves. Jane contacts Judy, who is with her new boyfriend Apollo Blue, and asks her to find Elroy at the plant. She, Astro, and Rudy-2 then go to the plant themselves.

Meanwhile, Elroy and Teddy-2 sneak into the plant, and they soon capture Fergie as well as an adorable little alien. Fergie tells them that the alien is a Grungee named Squeep, and she knows of them because she plays with them. With Teddy-2 translating, Squeep tells them that he and his fellow Grungees, who live inside the asteroid, have been sabotaging the plant because the mining is destroying their town. Along with an arriving Judy and Apollo, the gang head down into the mine shaft with Squeep, and they go to the Grungee community and see the destruction first-hand. A short time later, Jane, Astro, and Rudy-2 come into the plant, and Jane and Astro follow the gang’s scent down the shaft and meet up with them. George then appears, bound and gagged, and after Jane removes his gag, she tells him that he must close down the plant. He refuses, not wanting to lose his vice-presidency, but she shows him just what the plant is doing to the Grungees’ homes and tells him that no job is worth destroying the lives of innocent creatures.

Spacely then appears at the plant and sees that everything is shut down, so he gets the machines going again, mindlessly determined to get profits for his company as well as his millionth sprocket. Rudy-2 tries to tell Spacely that there are people down below and then tries to turn the machines back off, but Spacely deactivates him. The drilling causes a cave-in that almost kills Elroy and Squeep, but thankfully everyone makes it back up to the plant safely. George stands up to Spacely and tells him that he is shutting down the plant, and when Spacely denies him access to the main power button, George goes inside the plant’s machinery and blows up a key component of it to render everything inoperable.

George confronts Spacely again and demands to know if he knew that the Grungees inhabited the asteroid before he started to mine it, and he admits that he did, but chose to ignore them because he considered them inconsequential. George suggests to Spacely that he let the Grungees run the factory and become partners with him, and they will create new sprockets by recycling old ones and then sell them to Spacely at a fair price, so that way their homes will no longer be threatened. Spacely has no choice but to agree to it, and the Grungees end up doubling production and give him his millionth sprocket. George then asks him if he is still vice-president, but Spacely tells him that he’ll be lucky if he gives him his old job back. After some pressure from George’s family and friends, however, Spacely decides to let him remain vice-president, but without a raise.

However, now that the Grungees are running the plant, this means that George is no longer needed on the asteroid and he and his family can return to Earth. Days later, the family say their goodbyes to their new friends (though Apollo promises to come visit Judy) and then start their return journey home. As they go, they pass over the plant and see the Grungees arrange themselves on its roof to form the words “Thanks George.” 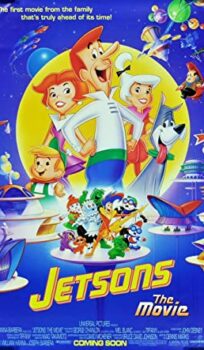