John Carter kills Sab Than (Dominic West), marries Dejah Thoris (Lynn Collins) and tosses away into a canyon the Thern amulet that allowed him to project himself to Barsoom (Mars). At that moment, Matai Shang (Mark Strong) appears and banishes Carter back to Earth.

The film returns to Earth in 1881, where a young Edgar Rice Burroughs (Daryl Sabara) is reading Carter’s journal that was willed to Burroughs after Carter’s untimely and sudden death.

Burroughs learns that Carter has been tracking Thern activity on Earth for about ten years. When Burroughs opens Carter’s mausoleum using the clues he found in the journal, there is no body inside. A Thern appears, believing that the mausoleum was merely a “safe room” for Carter to keep his body while he projects himself to Mars. Carter leaps from the shadows, kills the Thern and uses the amulet to return to Barsoom.

Carter tells the young Burroughs to protect the mausoleum, where his body is now, in fact, resting while his “avatar” lives a hero’s life on Mars.

A lot of other fun stuff happens, in this much-maligned, but enjoyable visualization of this seminal work of science fiction. 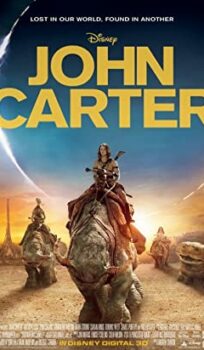