Kate (Brittany Snow) moves into a new high school because her mother Lori (Jenny McCarthy) keeps moving them.  Kate meets John Tucker (Jesse Metcalfe) at her job in a restaurant while he’s on separate dates with Carrie (Arielle Kebbel), Heather (Ashanti) and Beth (Sophia Bush).  One day in gym class, Kate, Carrie, Heather and Beth end up on the same team for a volleyball game.  During the game, Carrie brags about being with John Tucker, and the girls learn about his scheme of dating different girls from different cliques so they never meet.  After he breaks up with all three girls, they agree that breaking his heart is the ideal revenge. They then enlist Kate to be the heartbreaker.

Kate joins the cheerleading team in order to get John’s attention and the girls give her advice on how to act around John and spy on the dates using surveillance equipment.  Beth notices that Kate is starting to fall for John.  To counteract this, Carrie tapes John bragging to his friends in the locker room, saying he’ll be scoring “more than baskets” at the away game, and shows the tape to Kate in order to get her to snap out of it.
Meanwhile, Kate’s mother and Scott (Penn Badgley), “The Other Tucker” both discover the plan and lament the change in Kate’s behavior.  John ends up giving Kate his watch and asking her to be his girlfriend.

At John’s birthday party, the tape the girls made of John’s destruction is played, and Kate reveals the entire plot. Heather, Beth, and Carrie defend her after a guest throws his drink at Kate. Still, John Tucker is unfazed, and the party devolves into a cake fight.

A few days later, John and Kate agree to be friends, and John resolves to be honest, telling his new girlfriend about his other girlfriend. Scott, happy that Kate confessed, becomes her lab partner again, and it is hinted the two will begin dating. Kate is now good friends with Beth, Carrie, and Heather. Kate finishes saying, “as for the girl who made John Tucker fall in love, well, she’s a legend.”

During the credits, Kate warns viewers at home wanting to try this that destroying a man has consequences, and the camera pans to several male teachers bending over to grab some papers, all wearing thongs. 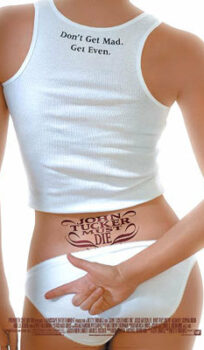