POOPER:
After killing a lot of henchmen, John eventually kills Iosef and Viggo.  John later adopts a puppy and goes back into retirement.

LONG VERSION:
John Wick (Keanu Reeves) is a retired hitman who’s wife has just died.  He is still mourning her death when he is attacked in his home by a group of thugs who steal his car and kill his dog.  An enraged John learns that the leader of the group is Iosef Tarasov, the son of Russian mobster Viggo Tarasov, whom John had worked for before retiring.  Knowing John will try to kill his son, Viggo sends a hit squad to kill John first, but he quickly kills them and begins his search for Iosef.  Viggo then puts up a $2 million contract on John, and he approaches Marcus (Willem Dafoe), John’s friend and mentor, to do the job.  He accepts, but he decides to protect John instead of killing him.

John is hiding out in a hotel that caters to hitmen and other underworld figures.  Winston (Ian McShane), the hotel manager, has said that business cannot be conducted at the hotel, but Viggo decides to add a clause to the contract that he will pay double if John is killed there.  John finds Iosef at a nightclub owned by Viggo, where he kills all of the henchmen protecting Iosef, but he gets away.  Back at the hotel, John is recovering from his wounds from the fight when he is attacked by Perkins (Adrianne Palicki), a female hitman and former girlfriend of John’s.  Marcus, watching from across the street, tipped off John to her attack by shooting the pillow next to him.  John quickly subdues Perkins, and now knowing that there is a contract on his life, makes her tell him where Viggo keeps his money.  She tells him it’s at a church, and after he ties her up, John goes to the church.  It’s actually a front for Viggo’s cash holdings, so John kills all of the guards and burns all of the money.  Meanwhile, Perkins is able to escape from the hotel room.

Viggo arrives at the church, where John is waiting to ambush him.  John kills most of Viggo’s bodyguards, but Viggo is able to capture him.  John is to be tortured and killed by a pair of henchmen, but Marcus shows up and kills one of the henchmen.  John is able to kill the other one and goes after Viggo.  He catches him and forces Viggo to cancel the contract and reveal Iosef’s location.  John then goes to where Iosef is hiding out and quickly kills him.  Viggo learns that Marcus has been helping John instead of trying to kill him, and has him killed in his home.  Viggo then calls John and tells him about Marcus.  John goes to Marcus’s house, where Perkins is waiting to ambush him.  But before she can kill him, Winston and his men kill her for breaking hotel rules.  Winston then calls John and tells him that Viggo is attempting to leave the city from the harbor.

John and Viggo arrive at the harbor at the same time.  After quickly killing his remaining henchmen, John goes after Viggo.  They get into a lengthy fight, with John ultimately winning by stabbing Viggo to death with his own knife.  An injured John then breaks into a nearby veterinary clinic to patch himself up, where he sees a lonely pitbull puppy.

The movie ends with John taking the puppy and walking home together, presumably back into retirement. 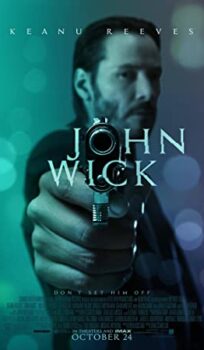