SHORT VERSION:
Everything comes to a head at the headquarters of the LoTeks: The LoTeks fight and defeat the group of Yakuza under Shinji’s command, and Johnny fights and kills Shinji himself. Takahashi – earlier shot and mortally wounded by Shinji and having discovered that PharmaKom developed the cure for NAS while his daughter was still alive, but chose not to cure her because treating it was more profitable – then gives Johnny the second image for the download code for the cure before he expires. Johnny then saves Jane from Karl, an assassin Takahashi had hired to retrieve the data from Johnny’s head, and then he kills him.

After the second image is scanned into a computer, Johnny hooks himself up to the machine connecting him with Jones (a genetically and mechanically enhanced dolphin who is a whiz at hacking and code decryption) and hacks into his own brain to find the third and final image. He finds it and loops it through Jones to reveal it, breaking the code and enabling the cure to be successfully downloaded and transmitted worldwide, and Johnny gets his first full childhood memory back that includes his mother. The movie ends with him and Jane watching as the PharmaKom building goes up in flames.

LONG VERSION:
On a suggestion from Jane (Dina Meyer), Johnny (Keanu Reeves) visits her street doctor friend Spider (Henry Rollins) to try to get the data removed from his head. Spider takes them both to a hospital, and after running a scan on his head, he reveals to Johnny that the data he is carrying in his head is the complete PharmaKom research and development information for the cure for Nerve Attenuation Syndrome, plus the records of the field trials to prove that it works. PharmaKom and the Yakuza have been trying to re-acquire it so they could take it back to Saigon and run it through a quantum interference detector, therefore giving them the cure and leaving it out of the hands of Spider and the other doctors trying to treat Jane and others afflicted with the illness. What’s worse, if Johnny were to die while the data remained in his head, then the cure will be lost forever. Karl (Dolph Lundgren) – a contract killer hired by Takahashi (Takeshi Kitano) to kill Johnny and remove his head (though he doesn’t know what the data inside it is for) – then barges in and attacks the trio, so Spider grabs hold of Karl to stall him and yells for Jane to take Johnny to someone named “Jones”. As the duo run away, Karl kills Spider.

Jane takes Johnny to the headquarters of the LoTeks, an anti-establishment group commanded by J-Bone (Ice-T), and there, Jones is revealed to be a dolphin who was genetically and mechanically altered by the U.S. Navy to become a whiz at hacking and code decryption. Johnny gets situated into a device connecting him to Jones and has the first image for the download code scanned into the computer, but as Jones attempts to hack into the data to find the second and third images, the procedure is abruptly stopped when Shinji (Denis Akiyama) attacks the base with some Yakuza under his command, and Takahashi enters alone through a separate passageway. J-Bone tells Johnny that the only way left now is for him to hack his own brain for the images and then loop the data through Jones.

As J-Bone and the other LoTeks do battle with the Yakuza, Takahashi finds Johnny and Jane, and he scares off Jane with gunfire. Before he can shoot Johnny, the visage of Anna Kalmann (Barbara Sukowa) – the founder of PharmaKom who died six years ago but whose consciousness was imprinted into the company’s neural net installation before she died – appears on the nearby video screens and tells Takahashi that Johnny is carrying the cure for NAS in his head, and then informs him that PharmaKom had the cure for the illness before his daughter died from it, but they let her die because treating the disease was more profitable than curing it.

Shinji then emerges and (apparently) shoots Takahashi dead, and then he confronts Johnny while one of his men holds Jane hostage. Jane fights back, however, and she beats up several more Yakuza while Johnny and Shinji start fighting it out. They end up falling through a shipping container leading to an outdoor several-storey drop, with them clinging onto a net. Johnny eventually grabs Shinji’s laser wire and decapitates him with it, and after climbing back up, Takahashi appears and gives Johnny the second image for the code before falling down dead. As this happens, Karl appears before Jane and fights her, and Johnny saves her before he can fatally stab her. As they brawl, Jane aims one of Jones’ satellite dishes at Karl, and Jones sends out a sonar wave that causes all of Karl’s cybernetic implants to rupture. Johnny then has him grab two live electrical wires, and he gets burned to a crisp.

J-Bone gets the power back online, and Johnny gets hooked back into the machine just after the second image is scanned in. Anna appears on the TV screens and tells Johnny that Jones can take him into the data and begs him to find the third image. J-Bone sends a message out to the world that the cure for NAS will be transmitted soon, and Johnny hacks his own brain and finds the third image, and after looping it through Jones, it is revealed to be an image of Anna herself. With the code now broken, the cure is successfully downloaded and transmitted all across the world, and Johnny gets a full childhood memory back that includes his mother. The movie ends with Johnny and Jane watching the PharmaKom building go up in flames. 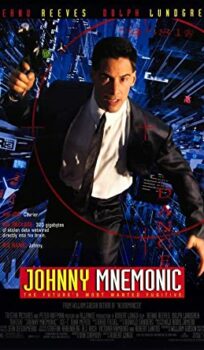