One day, Johnny (Brandon Baker) and Sam (Lee Thompson Young) – fed up with their lives in Vermont – run away from their homes, and stow away on a military plane bound for Hawaii. They make it to Johnny Tsunami’s (Cary Hiroyuki-Tagawa) house, who allows them to stay with him until they feel ready to go back. When they do go back, he decides to come with them.

On the first night of his visit, Johnny Tsunami privately talks to Pete (Yuji Okumoto) and gets him to understand that Johnny will do what he feels he has to do, and he must support him no matter what. He also tells Pete that, despite their past differences, he is proud of him.

The next day, Johnny and Johnny Tsunami go snowboarding on the ski slopes (which Tsunami proves to be great at), and at the bottom, Brett (Zach Bostrom) and his crew confront them. Johnny eventually proposes to Brett that they have a race tomorrow from the cornice to the bottom, with two stipulations: If Brett wins, the snowboarders will stay away from the skiers’ side of the mountain forever, but if he wins, then everyone would share the mountain. Brett initially shows no interest in taking him up on his challenge because of how things would stay the same if he won, but after Johnny Tsunami shows him his prized Tsunami Medallion and says that he’ll award it to the victor, he accepts.

Despite several dirty tricks by Brett, Johnny wins the race, and Emily (Kirsten Storms) presents him with the Tsunami Medallion. At a celebration party back at Johnny’s house, Pete and Melanie (Mary Page Keller) tell Johnny that, if he wanted to, he could go back to Hawaii with his grandfather and spend the rest of the school year there, but he decides to stay in Vermont with them. Randy (Steve Van Wormer) and Ronny (also Steve Van Wormer), the feuding brothers who co-owned the mountain, tell Johnny that his efforts to bring the skiers and snowboarders together have inspired them to put an end to their feud, and they will now open up the mountain to skiers and snowboarders all the time. The movie closes with Johnny hugging Emily and then dancing with her. 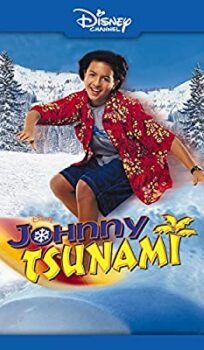