Submitted by Alex (Short), and Evan B (Long)

SHORT VERSION:
Jojo (Roman Griffin Davis) is a young child in Nazi Germany who believes fully in Hitler and imagines him (played by Taika Waititi) as his best friend.

Jojo discovers his mother Rosie (Scarlett Johansson), who opposes Hitler’s ideas, is hiding a Jewish teenager, Elsa (Thomasin McKenzie) in a crawl space. Unable to report her for fear of endangering his mother, Jojo begins interviewing Elsa to learn more about the Jews to please Hitler.

Over time, he begins to see Elsa as a real person and even forms a crush on her, despite Hitler trying to pull him back he to Nazism. Rosie is executed by the Gestapo, and when the Americans finally take Germany, Jojo kicks him out of a window, fully through with him, and he and Elsa leave their home and go out into free Germany.

LONG VERSION:
Jojo (Roman Griffin Davis) is a 10-year-old boy living in Germany towards the end of World War II. He lives alone with his mother Rosie (Scarlett Johansson) as his father is off ostensibly fighting in the German army and his older sister died tragically young. Jojo is fully indoctrinated by Nazi propaganda. He is so infatuated with Nazis that Adolph Hitler (Taika Waititi) is his imaginary best friend. Although it is obvious that the regime is oppressive, the war is taking a massive toll, and that Germany is losing, Jojo idolizes Hitler.

Jojo is enrolled in a camp to train him and other youth to be soldiers. It is led by the disillusioned Captain Klenzendorf (Sam Rockwell), a disfigured soldier. He is aided by his assistant and possible lover Finkel (Alfie Allen) and bloodthirsty Fraulein Rahm (Rebel Wilson). Jojo is given the derogatory nickname “rabbit” because he is considered a coward who will run away at the first sign of trouble by his teenaged peers. To prove his bravery, Jojo steals a grenade and tries to throw it during a training exercise. He ends up messing up his attempt and blowing himself up, leaving him scarred, disabled, and rendered to doing menial tasks.

One day, Jojo comes home early and hears a noise in his sister’s old room. He investigates and realizes that there is a hidden door to a space behind the house walls. Jojo enters it and finds a Jewish girl named Elsa (Thomasin McKenzie) hidden therein. After she intimidates him, Jojo realizes that if he were to turn Elsa in, the Nazis would likely kill his family for harboring her. Instead, with Hitler’s urging, he attempts to use Elsa to write an expose on the Jewish people. The two have an antagonistic relationship, with Jojo spouting Nazi propaganda at her and she constantly belittles him

Meanwhile, Rosie continually presses Jojo to abandon his hateful ways. It is revealed to the viewer that Rosie works for the German resistance, as does Jojo’s dad from overseas. Rosie confides in Elsa that she knows there is still a good and loving boy within Jojo’s hardened exterior.

Over the weeks, Jojo bonds with Elsa and becomes more receptive to Rosie’s efforts to convince him that the war is bad. He learns that Elsa has a fiancée named Nathan waiting for her and empathizes when he learns that her parents have been exterminated. Eventually, Jojo realizes he has fallen in love with Elsa.

One day, the SS led by a man named Deertz (Stephen Merchant) arrives unexpectedly at Jojo’s house while he is hanging out with Elsa and his mother is away. They begin searching the house when Klenzendorf and Finkel suddenly arrive to try and steer the SS away. Elsa comes out of hiding to help Jojo and claims to be his sister. They demand Elsa’s ID papers and she gives Jojo’s sister’s papers to Klenzendorf. He interrogates Elsa about the biographical info therein and says Elsa gave accurate answers to his questions. This gets the SS to leave (as does their seeing Jojo’s room decorated with tributes to Hitler). After they leave, Elsa realizes she answered the questions incorrectly (meaning Klenzendorf protected them by falsely saying she answered the questions correctly). It soon becomes clear why Klenzendorf helped – Jojo finds his mother had been discovered as a spy and executed in the town square. Jojo sobs over her body and returns home and tries to stab Elsa in his anguish. He can’t go through with it and the two instead embrace at their loss. It is also revealed that Elsa’s fiancée actually died of tuberculosis at the outset of the war. Hitler tells Jojo he must choose where his loyalties lie soon.

Soon thereafter, the town comes under attack by the US and Russian forces. The Nazis conscript everyone, including children, to help defend the city (with Rahm even sending kids on suicide missions until she is killed). Jojo connects with his real-life best friend/fellow 10-year-old Yorki (Archie Yates) and confesses he loves a Jew (and Yorki says that that is OK and they have bigger problems). Yorki also tells Jojo that Hitler has committed suicide in real life. After the battle, Jojo tries to go home but is rounded up by enemy soldiers as he is wearing a Nazi uniform. He sees Klenzendorf there and the two have a heart-to-heart where Klenzendorf expresses regret that Rosie was killed despite being a good person. Klenzendorf then rips off Jojo’s Nazi jacket and accuses Jojo of being a Jew so that the enemy forces will let him go (it is heavily implied that the enemy forces summarily execute Klenzendorf and the other Nazi soldiers after Jojo is released).

Jojo goes home and realizes that now that Elsa is free, she can leave him (potentially alone as the fate of his dad is never revealed). He lies to her and says Germany won the war. Jojo realizes what he has done is wrong and tells Elsa he has a plan to get her to freedom. He also confesses his love for Elsa and she returns it … saying she loves him as her brother. Before he enacts his plan, he has a final argument with imaginary Hitler that ends with Jojo kicking Hitler out the window and his life (symbolically rejecting Nazi ideology). Jojo’s plan is then to simply open the front door and show Elsa that the Germans lost the war. She slaps Jojo for his deceit, but then the two dance with each other to celebrate that Elsa is safe (Elsa said earlier in the film she would dance to celebrate her freedom if it ever happened, and Rosie also said that dancing was indicative of living life). 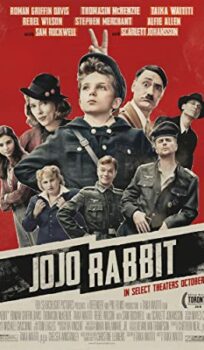