Jonah Hex (Josh Brolin) was part of the Confederate army during the civil war of the US.  He went against bad orders from his commanding officer, Quentin Turnbull (John Malkovich), and got his best friend and Turnbull’s son killed.  Turnbull took out revenge on Jonah by killing his family in front of him.  Turnbull branded Jonah on the cheek and left him for dead.  He was almost dead when the Crow Indians found him and brought him back to life.  Since then he has been able to talk to the dead if he touches them.  Jonah didn’t like Turnbull’s brand and tried to take it off with a hot knife but messed his face up in the process.

Jonah went searching for Turnbull.  Jonah heard that Turnbull got killed in a fire so became a bounty hunter.

President Grant (Aidan Quinn) gets word that items are being stolen with the mark of Turnbull.  Grant decides that Jonah is the right man for the job of getting Turnbull.  Lieutenant Grass (Will Arnett) and the rest of his army don’t do much while Jonah corners and kills Turnbull in his own super weapon machine.  Turnbull tried to use Lilah (Megan Fox), who loves Jonah, as leverage but Jonah didn’t buy it.

The movie ends with Jonah riding off the sunset alone to continue his quest to right wrongs his own way. 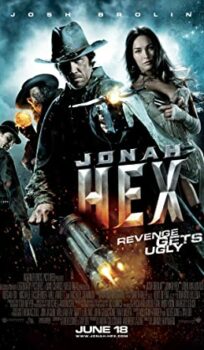