Journey to the Center of the Earth(2008)

Following a lead from his missing brother, scientist Trevor (Brendan Fraser) travels to Iceland, joined by his nephew Sean (Josh Hutcherson) and local guide Hannah (Anita Briem), where the trio discovers a cave which leads them to the Center of the Earth. A lengthy adventure follows, including run-ins with a dinosaur, carnivorous plants, giant pirahnas, a mine cart ride, a fall down an endless shaft, and glowing birds (all of these are complemented with the 3D effects of having things pop up in your face).

During this, they find the brother’s body and bury it, Sean and Trevor bond, Trevor gets the girl, and they discover that Jules Verne’s novel is actually fact, that the story was told to him by a explorer long ago who actually made the journey.

Eventually they use a geyser to escape, resurfacing in Mount Vesuvius in Italy and destroying a man’s house. Sean pays him off with diamonds he found in the Center. Trevor uses the money from these diamonds to keep his brother’s research laboratory open (it was about to be shut down due to lack of funds). Sean keeps one of the glowing birds as a pet, and at the end of the film, Trevor hands his nephew a book about Atlantis and suggests another trip (sequel?). 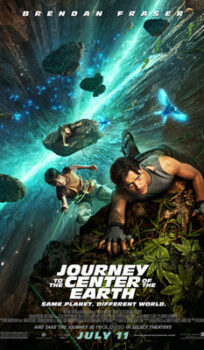