POOPER
Fred’s appeal is denied and is ordered back to prison, but J. Edgar Hoover wants him neutralized before he gets there. The FBI gives Bill a vial of sedatives to poison Fred. On Fred’s last night of freedom, several Black Panthers are at Fred and Deborah’s apartment for a final get-together. Bill slips the sedatives into Fred’s drink and quietly leaves the party. The next day, the Chicago police raid the apartment and shoot several Panthers, including Fred (even though he’s already dead due to the poison), and arrest Deborah. For his part, Agent Mitchell gives Bill a large sum of money and the keys to a gas station that was seized by the FBI and now belongs to Bill. Years later, Bill gives an interview to a documentary film crew about his time as an informant. On the day the documentary premieres on TV, Bill commits suicide.

LONG VERSION
In 1989, William “Bill” O’Neal (Lakeith Stanfield) is giving his first and only interview about his time as an informant for the FBI against the Black Panthers. Told in flashbacks, the story begins in 1968, when a then 19-year-old Bill is arrested for trying to steal a car while impersonating an FBI agent. At the police station, FBI agent Roy Mitchell (Jesse Plemons) tells Bill that he faces up to 6 1/2 years in prison, or he will drop the charges if he agrees to work with him. Bill agrees and is told what he must do. At this time, the FBI, led by J. Edgar Hoover (Martin Sheen), has declared the Black Panther Party a danger to America, and they must be stopped at all cost. Agent Mitchell orders Bill to go undercover at the Chicago chapter of the Black Panthers, led by their young charismatic Chairman Fred Hampton (Daniel Kaluuya), and report back anything he finds to him.

Bill joins the Panthers and is immediately welcomed by Fred and the others. Fred and the Panthers are going around Chicago trying to recruit new members, as well as join forces with street gangs and other groups with similar views as theirs. His persuasive speeches get many to join up, and this new collaboration would later become the Rainbow Coalition. But during one meeting, Bill’s cover is nearly blown when a gang member recognizes him as the guy who tried to steal his car. The Panthers confront Bill about this, but he convinces them that the badge he used was a fake and he’s not really an FBI agent. Even though he doesn’t have much to share at first, Bill regularly visits Agent Mitchell and tells him about the Rainbow Coalition and other things he’s seen and heard. As compensation, Mitchell gives Bill some money. While this is happening, Fred has fallen in love with Deborah (Dominique Fishback), a recent recruit of the Panthers who is helping Fred with his speeches.

Sometime later, Fred is arrested for allegedly stealing ice cream bars and is given a 5-year prison sentence. During his absence, Bill rises in the ranks of the Black Panthers and is now the head of security for the Chicago chapter. One day, several members of the extremely racist Chicago police are parked outside the Black Panthers’ headquarters, and they successfully bait the Panthers into a gunfight. Bill narrowly escapes, and the rest of the Panthers are arrested. Afterward, the police burn down the Panther’s building. Bill, furious that he was nearly killed by the police, goes to Agent Mitchell and attempts to quit. Mitchell refuses to let him quit, saying that he would otherwise re-charge him with the car theft and impersonating an FBI agent. So Bill stays on, and leads the Panthers in rebuilding their headquarters. Three months later, just as the renovations are finished, Fred is released from prison while his case is on appeal. Upon his return, Fred learns that Deborah is now pregnant with their child.

While Fred was in prison, two significant things happened. The first involves George Sams (Terayle Hill), a member of the New Haven chapter, who is wanted for the murder of an FBI informant. Sams is hiding out in the Chicago HQ, and Bill tells Agent Mitchell this. Mitchell tells Bill that while Sams did actually kill someone, it wasn’t an informant. Sams is the FBI informant, and his presence in the Panther’s HQ is enough for the FBI to get a warrant to raid the building. Sams also has a deal with the FBI, like Bill has, and his job is to go from one chapter to another so all of them can be raided. Mitchell also tells Bill when the raid will occur so he doesn’t get picked up that day. The second involves a young Black Panther named Jimmy Palmer (Ashton Sanders). He was shot by the Chicago police but survived with non-life-threatening injuries. But a few days later, while the police are transferring him to another hospital, Palmer suddenly dies. While his cause of death is never revealed, it’s heavily implied that the police were responsible. Another Panther, Jake Winters (Algee Smith), is furious with the cops for what they did to his friend and instigates a shootout with the police. Winters is able to kill several police officers before being killed himself.

Shortly after their funerals, Fred learns his appeal was denied by the Illinois Supreme Court, so he has to go back to prison. Bill is summoned by Agent Mitchell, who tells him that J. Edgar Hoover has ordered Fred to be neutralized before he can return to prison. Other Black Panthers, like Huey Newton and Eldridge Cleaver, have become even more popular since going to prison, and he doesn’t want that to repeat itself with Fred Hampton. Mitchell tells Bill he will be receiving a package from another informant that contains a vial of sedatives, with will be used as a poison once they are slipped into a drink. Bill is hesitant to accept the new assignment, as he is now going from being an informant to a potential killer, but Mitchell tells him that if he refuses, he’ll make sure the Black Panthers find out he’s an informant. The next night, on Fred’s last night of freedom before returning to prison, several of the Panthers are having a final get-together at Fred and Deborah’s apartment. Bill received the package earlier that day, and he is also there. Another Panther offers Fred a large sum of money for him and Deborah to flee the country, but Fred refuses to be on the run for the rest of his life, and instead wants the money to be used to establish a trust in Jake Winters’ name. As everyone is getting more and more drunk, Bill slips the sedatives into Fred’s drink and quietly leaves the party.

Early the next morning, the Chicago police, based on an anonymous tip, raid the apartment with a warrant looking for weapons. The cops storm in guns blazing, shooting most of the Panthers, who are so hungover they can barely get off a shot in return. They surround Fred, still laying in bed, and shoot him several times, even though he was already dead due to the poison. They then arrest the injured Panthers as well as Deborah, with several guns pointed at her pregnant belly. That night, Bill meets with Agent Mitchell, who tells him that he did a great job, and hands him a large sum of money. He also hands him a set of keys. Mitchell says that Bill needs to lay low for a while, and he’ll need a way to make money. The keys are for a gas station that was earlier seized by the FBI, and it now belongs to Bill. Mitchell ends the meeting by telling Bill that they will get in contact with him when they need his services again. Now back in 1989, the documentary crew are finishing up their interview of Bill, and the footage is now of the real William “Bill” O’Neal, saying he was proud to be a member of the Black Panthers, despite what he did for the FBI.

The movie ends with several title cards and videos. The documentary featuring Bill’s interview, Eyes on the Prize 2, premiered on PBS on Martin Luther King Day in 1990. That same night, Bill O’Neal committed suicide. With a video of the funeral and other speeches by the real Fred Hampton playing, a title card reads that the families of Fred Hampton and Mark Clark, another Panther killed in the apartment raid, sued the Chicago police and the FBI for $47 million. 12 years later, a settlement was reached for $2 million, ending the longest civil trial in US history. 25 days after Fred’s death, Deborah gave birth to a son, Fred Hampton, Jr. She remained a member of the Black Panthers until the party was dissolved in 1978. Today, Deborah (now known as Akua Njeri) is a member of the Black Panther Cubs, an offshoot of the original Black Panthers. Their chairman is Fred Hampton, Jr. 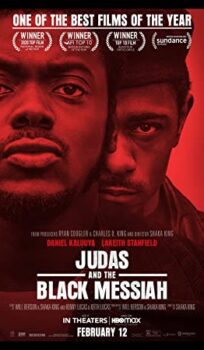