Pooper:
The five kids finish the game and are restored into reality. Alex is restored at the time he was taken, so he is an adult and his family never knew the tragedy that had befallen them. The four teenagers destroy the Jumanji game and Spencer starts dating Martha.

Long Ending:
The Jumanji board game from the first film is found by a jogger in the 1990s and brought home. The jogger gives the game to his teenage son Alex. Alex tosses the game aside dismissively and turns on a video game instead. The board game morphs into a video game during the night. When Alex awakes, he pops in the Jumanji game and begins to play. A green light fills the room.

The film jumps ahead twenty years to the present day. Alex’s home is in ruins, with his parents falling into depression after Alex disappeared twenty years ago. Meanwhile, four teenagers get put into detention. Geeky Spencer (Alex Wolff) is caught writing papers for jock Fridge (Ser’Darius Blain). Cool girl Bethany (Madison Iseman) is caught video chatting in class. And sarcastic, know-it-all Martha (Morgan Turner) is rude to her gym teacher. While in detention, they find the Jumanji video game and begin playing it. A green light fills the room and the foursome are pulled into the game and inhabit the bodies of the characters they selected. Bethany becomes a portly, male cartographer named Sheldon Oberon (Jack Black). Madison is sexy martial arts master/adventurer Ruby Roundhouse (Karen Gillan). Spencer is bodybuilder/archaeologist Dr. Smolder Bravestone (Dwayne “The Rock” Johnson). And Fridge is Bravestone/Spencer’s short assistant and zoologist, Mouse Finbar (Kevin Hart).

They soon realize that they must finish the game to escape. In the game, a villain named Van Pelt (Bobby Cannavale) stole a gemstone from a giant panther. This gave him control over the animals of Jumanji. The game can only be won when the players restore the gemstone (given to them at the beginning of the game in a cameo by Rhys Darby). Each player has special skills, but soon learn that they must work together to survive each video game level. Making matters worse, they have a finite number of lives and every animal  in the game wants to kill them.

As they progress through the game, they each become more like their video game counterparts. Spencer and Martha become more confident and heroic, Fridge sacrifices himself for the good of the group, and Bethany becomes more concerned with others. They eventually meet Seaplane McDonough (Nick Jonas), the character that Alex inhabited when he was sucked into the game. He has been stuck in Jumanji for twenty years, living in Alan’s hut (Robin Williams’ character from the first film). Unable to complete the game on his own, he is down to his last life. Alex joins the group and forges a special bond with Bethany, who transfers one of her lives to him. Spencer and Martha also express their feelings for each other.

Eventually, they reach the jaguar statue. Each character has a heroic moment and Spencer is able to reinsert the gemstone. Spencer asks Martha to stay in the game with him, but she responds that they need to become their characters outside the game (i.e., carry over their friendship and character traits to the real world). The five then depart the game back to the real world. The four teens race over to Alex’s house to find the house in good order, Alex’s parents now happy grandparents, and Alex (Colin Hanks) a married adult. When the game was beaten, he was restored to his teenage life as though he was never sucked into the game. He thanks the teens for saving him, and reveals that he named one of his daughters Bethany in honor of their time together. The four teens remain friends, with Spencer and Martha starting a relationship. The film ends with the four teens crushing the Jumanji video game cartridge. 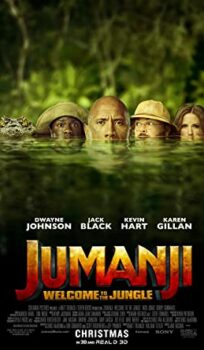