In spite of disasters happening all around, getting sucked into the floor, and being chased by an insane big-game hunter, Alan (Robin Williams), with the help of Sarah (Bonnie Hunt), Judy (Kirsten Dunst) and Peter (Bradley Pierce), is able to complete the game and call out “Jumanji!” When, as the game promises, all is returned to normal it’s not the normal of 1995 when Judy and Peter started playing, but rather the normal of 1969, when young Alan (Adam Hann-Byrd) and young Sarah (Laura Bundy) discovered the game. Alan finds his father (Jonathan Hyde), and confesses to destroying the factory’s conveyor belt, thus saving Carl’s (David Alan Grier’s) career and the Parris Shoe Company business. Flash-forward to 1995, where Alan and Sarah are now happily married, and are hosting the company Christmas party. They have just hired Jim and Martha Shepherd (Malcolm Stewart, Annabel Kershaw) to work for Parrish Shoes, and insisted that they bring their children to the party–Judy and Peter! When Jim mentions their upcoming ski vacation (the cause of their deaths in the alternate timeline), Alan and Sarah talk him out of going. 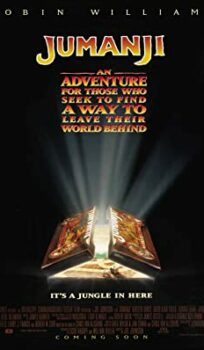