Mowgli is adopted by the manvillage, learns English, and reconnects with his mother. He also shows a young woman to the lost city of gold. But Mowgli is not happy with life as a man. He goes back to the jungle and, with a talking Kaa’s help, kills Shere Khan to claim himself as the protector of the jungle.

Buldeo finds out about the lost city.  He, the barber, and the pundit (boxer) go into the jungle to steal more treasure. Mowgli watches along with the other jungle animals, but does nothing to stop them.

In his sleep, the pundit kills the barber in an attempt to steal a ruby staff that Buldeo gave to him. He later tries to kill Buldeo, but Buldeo pushes him into the water, where a crocodile gets a hold and drags him off into the stream. While escaping, Buldeo drops the staff into another croc’s snout. While being chased out of the jungle by Bagheera and co., Buldeo drops the rest of what he had stolen.

Buldeo returns to the village treasureless and enraged. He blames his cohorts’ deaths on Mowgli, and vows revenge by burning down the jungle.

Mowgli returns to the village to save his mother and get all the humans to safety, along with his jungle friends. Mowgli’s mother releases him as her son in acknowledgement of his new role as protector of all life and keeper of the jungle law.

The closing narration ends with a flash forward as an aged Buldeo is telling the story to a group of English tourists. When asked how he escaped the burning jungle, he replies, “That is another story.” 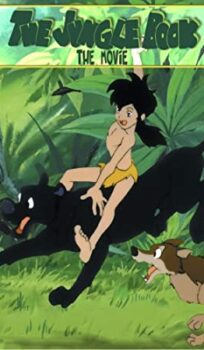