There are many well-known and seen character actors and actresses who appear throughout the movie, and there is even a cameo from Queen Latifah, in one of her very first screen roles, as the restaurant waitress with a heavy attitude.

The affair between Flipper (Wesley Snipes) and Angie (Annabella Sciorra) sets off a turbulent chain of events which turns many people’s lives upside down.

For a start, Flipper’s wife, Drew (Lonette McKee), finds out about it and, enraged, throws him out of the house -his belongings tossed by the window to be picked up by passersby and all-, and it turns out that Flipper’s neighbor and best friend, Cyrus (Spike Lee) told his own wife Vera (Veronica Webb) about it.  In turn, Flipper tries to apologize and ammend things with Drew, but she is so hurt that she just won’t want to have anything to do with him.

At the same time, Angie’s father, Mike (Frank Vincent) also finds out that she was sleeping with a black man, gives her a colossal beating -he slaps her, tosses her around and even hits her with a belt- and throws her out of the house, disgusted.  Meanwhile, Paulie Carbone (John Turturro), a mild-mannered convenience store clerk, who had been in love with Angie all his life, hears the confession from Angie and is heartbroken.  This, somehow, gives him the courage to ask black female customer Orin Goode -who came by frequently- (Tyra Ferrell) out; this puts him at odds with his father Lou (Anthony Quinn) and his friends, whom he gets into a fight with, although he winds up hurt himself.

In the Flipper’s relatives’ subplot, Flipper’s drug-addicted brother Gator (Samuel L. Jackson), who had once too many times conned his family out of money for his vice, comes one last time to his parent’s house, desperately trying to obtain some cash to smoke, but then his father, The Good Reverend Doctor (Ossie Davis) arrives while Gator argues with his mother Lucinda (Ruby Dee); The Reverend gets a gun, and shoots and kills Gator, who dies in his mother’s arms, much to her shock and sadness.

Despite the fervent opposition of everyone around them, Flipper and Angie tried their best to actually have a relationship, but the poop hits the fan when, one night, the Police almost arrests Flipper after receiving a wrongful report that “a white lady was being attacked” (this, due to somebody apparently having watched them two in a compromising position over a car hood from a window, since it looked like he was forcing her).  And, of course, he tells her that he refuses to have half-blood children with them.

Eventually, due to the great gap created between them two, Flipper admits that he was only curious about being with a white woman, and he tells Angie that she should accept she was also curious about black men.  They break up and he leaves the appartment they were sharing.  Angie, also, returns to her father’s house.

In the end, Flipper is seen having sex with Drew again, but she is laughing and crying at the same time; when they finish, she sends him off -they were obviously not back together, with no seemingly immediate solution in regards to it-; he kisses his daughter Ming (Veronica Timbers) goodbye and walks out.  Then, at the turn of the corner, a very young girl asks him to let her do oral sex on him for 2 dollars; stunned, he embraces her and screams: NOOOOOOO!!, while the film ends.  This particular detail had the film concluding in an ambiguous note; it was not clear whether the plot had leaped forward to some years later and this girl was Ming, or that he was only shocked to see this teenager whoring herself for drug money. 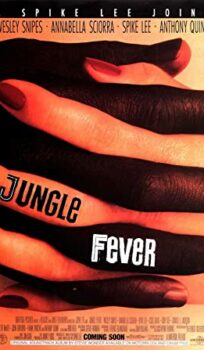