Jupiter Jones (Mila Kunis) discovers that she is the heir to Earth and the Abrasax family want to harvest the population to create an elixir that reverses aging.

Titus Abrasax (Douglas Booth) attempts to marry Jupiter so that he can kill her and inherit Earth, but Caine (Channing Tatum) and Stinger (Sean Bean) interrupt the ceremony. When they return to Earth, they find that Jupiter’s family has been kidnapped by Balem Abrasax (Eddie Redmayne), who promises to free them if Jupiter abdicates her position.

Caine rescues Jupiter’s family and Jupiter leaves Balem to die when his fortress collapses. She and Caine are rescued by a police fleet.

Jupiter returns to Earth, where she is now content with her life as a maid. Her family buys her the telescope that she wanted. Jupiter goes to the top of Sears Tower with Caine, who thanks to Jupiter’s position was pardoned of attacking a royal and now has bird-like wings, and she flies alongside him with Caine’s gravity manipulating boots. 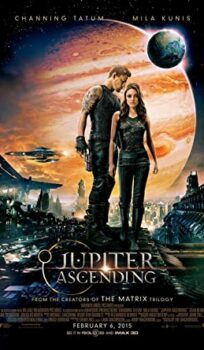