While on his way to the dock with DNA samples to be sold to Lewis Dodgson, a geneticist at Biosyn and InGen’s arch rival, Nedry crashes and is ultimately killed by a Dilophosaurus.

While Grant and the kids are making their way back to the visitor center, Ellie and Arnold (Samuel L. Jackson) are working to restore power to the park. Right after Ellie turns on the power, she is attacked by a Velociraptor, and finds out that Arnold was killed earlier.

Muldoon attempts to capture the remaining raptors, only to be caught in a trap they set.

Grant and the kids eventually make it to the visitor center, but are still being hunted by two raptors. The raptors eventually chase them in the main area, and as they are about to go for the kill, the T-Rex breaks in and kills both of them.

Grant informs Hammond that upon careful deliberation he has decided not to endorse Jurassic Park. Hammond agrees, and the survivors are flown by helicopter back to the mainland. 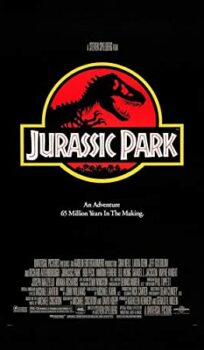