Short pooper:
As atonement for his scientific misdeeds of the past, Dr. Wu (BD Wong) decides to help solve the locust plague problem by creating a specimen with a genetic modification akin to the one Maisie (Isabella Sermon) received from her mother, Charlotte (Elva Trill). Dodgson (Campbell Scott) is killed by Dilophosauruses while trying to escape. All of the main characters survive… thanks to the intervention of “Rexy”. Alan (Sam Neill) and Ellie (Laura Dern) get back together and denounce Biosyn’s actions. Blue recovers her offspring, Beta. And, in the end, both the dinosaurs in the compound and living elsewhere throughout the world co-exist with humans and other contemporary animals. So, happy ending… of sorts.

Longer version:
The rampant global plague of genetically-modified locusts was created by Biosyn, when they intended to undermine crops from competing companies and make theirs the dominant brand, but it went awry; and, of course, Dr. Wu has behind it. Wu also reveals to Maisie the definitive truth about who she is and how she came to be: she is a direct clone of her mother, who used her own DNA to have her produced, but later died of a genetic anomaly, although she had the girl’s DNA altered to save her from it. Wu wanted to study her, as well as Blue and Beta, to find a solution to the locust pest.

Dodgson, seeing the nefarious experiments pulled off by Biosyn have been discovered, decides to burn down the lab to prevent anyone from knowing the truth, but the fire gets out of control and sets the whole facility ablaze. He also fires Malcolm (Jeff Goldblum) upon realizing he secretly helped the others. All of the main characters -both from the original and most recent trilogy- acquaint and work on an escape plan. Dodgson takes a bunch of dino-embryos and tries to flee through a tunnel, but is ambushed and killed by a trio of Dilophosaurus.

While escaping, the group comes across a Giganotosaurus that tries to kill them, but it is intercepted and fought by no other than the original T-Rex; this gives everyone a chance to safely escape in an aircraft from Biosyn; at the same time, a Therizinosaurus joins the quarrel and helps Rexy kill the Giganotosaurus.

Wu, having been saved by the others after offering to help solve the locust plague, owns to his word and creates a new genetically-modified locust, based on an element he discovered in Maisie, with the intention of releasing it so it mates with members of the destructive species, thus eventually bringing it down. Ellie and Alan rekindle their old romance and, using the sample they subtracted from Biosyn, prepare to go public about the company. As a family, Owen (Chris Pratt), Claire (Bryce Dallas Howard) and Maisie return to their home in Sierra Nevada and also reunite little Beta with its mom, Owen’s old “dino-friend”, Blue.

In the end, we see the majority of the dinosaurs at the Biosyn compound survive and continue living normally; also, all dino-species scattered throughout the planet manage to co-exist with other humans and animals, in what seems to be an effective neo-Jurassic World. 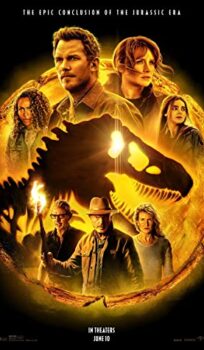