The dinosaurs on Isla Nublar are in danger of another extinction event as a volcano is set to erupt. Claire Dearing (Bryce Dallas Howard) is asked by Benjamin Lockwood (James Cromwell) (former partner of John Hammond) and his aide Eli Mills (Rafe Spall) to retrieve 11 species of dinosaurs to bring them to a new island sanctuary. Claire gets Owen Grady (Chris Pratt) and two of her employees – Franklin and Zia (Justice Smith and Daniella Pineda) – to join her as they fly to the island to rescue the dinosaurs. However, they learn quickly that Mills sent Ken Wheatley (Ted Levine) and his band of mercenaries to retrieve the dinosaurs to have them auctioned off. Several species are retrieved as the volcano erupts and destroys the island. The human heroes manage to get away in the nick of time.

Lockwood’s supposed granddaughter Maisie ( Isabella Sermon) (who is actually a clone of Lockwood’s deceased daughter) discovers that Mills and Dr. Henry Wu created the Indoraptor, a hybrid of the Indominus Rex and a Velociraptor. After she tells Lockwood, Mills smothers him to death before his scheme is found out. Owen and Claire get captured by Wheatley and Mills, and they are locked in a cell as the auction begins.

After they escape, Owen manages to stop the auction, but the Indoraptor is set free and eats Wheatley and Gunnar Eversol (the auctioneer working with Mills). Blue the Raptor shows up to help fight the Indoraptor, leading it to fall through the roof and get impaled on Triceratops horns. The other dinosaurs are in danger of dying from a deadly gas leak, but Maisie frees them from the mansion. The T-Rex and Carnotaurus eat Mills as he tries to escape.

The dinosaurs are now loose among society, leaving humanity in what is now a real Jurassic World. 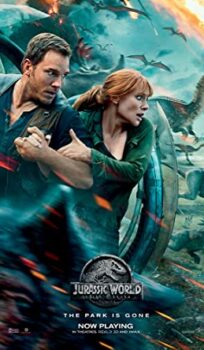