Smith (Thomas Dekker) receives a panicked phone call from his mother (Kelly Lynch) and rushes home to LA with his best friend Stella (Haley Bennet). When they arrive they find Smith’s mother gone, and have to fight off one of the masked animal men seen throughout the film.

Smith finds his mom’s cell phone, and discovers she has been tracking the secret cult Smith’s father started many years ago, called the New Order. Smith’s father had many illegitimate children, one of whom turns out to be London (Juno Temple), making her Smith’s biological half-sister.

After arriving back at his dorm, Smith is attacked by the masked animal men, who turn out to be Thor (Chris Zylka), Rex (Andy FIsher-Price), and Hunter (Jason Olive). They are members of the cult and have been tracking Smith on the orders of his father.

Meanwhile, The Messiah (James Duval) and Oliver (Brennan Mejia), who are part of an underground resistance fighting the New Order, find Stella and race off to save Smith. Oliver has psychic powers, a natural trait honed by the New Order (which is what gave Lorelai her witch powers). Oliver uses telekinesis to disarm Hunter and their two vehicles careen towards certain doom. Sensing the inevitable death of his son, Smith’s father presses the button, igniting nuclear holocaust and destroying the world. 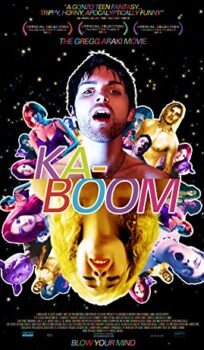