One night, Max (Francis Capra) helps Vasquez (Brandon Durand) and his friends – in an attempt to get them to ease up on bullying him – steal a $1 million pirated master cassette tape of Kazaam’s (Shaquille O’Neal) live performance earlier that night from the warehouse of the nightclub his estranged father Nick (James Acheson) works at. At school the next day, Vasquez tells Max that, if he wants to gain the full acceptance of him and his crew, he will tell Nick that the return of the tape will not come cheap.

When Max later goes to the club to see Nick, he stays out of sight as he sees Nick getting beaten up by his boss Malik (Marshall Manesh) and his men over the theft of the tape, since Nick was the one supervising the warehouse that night, and Nick promises Malik that will get him the tape by midnight. Accepting that helping Nick out of this jam is greater than winning over Vasquez and company, Max decides that his second wish will be for Kazaam to produce the tape for him. He calls out to Kazaam and gets brought by him into a restaurant, where he is on a date with his new girlfriend Asia (Fawn Reed), and he makes his wish. However, believing that Max is wasting the wish on something trivial, Kazaam whisks him into the club’s recording studio to find it. Max tells him that he knows the tape isn’t here, but when Kazaam questions Max on why that is so and voices his suspicion that something funny is going on, Max won’t give him any answers and just demands that he give him the tape. Kazaam creates it for him using his boom box, but neither are aware that the surveillance cameras have recorded them.

Later that day, Nick confronts Max outside his school after he gets out of detention and tells him that he knows that he and his “friends” stole the tape. When Max starts to cry, Nick asks why he came into his life now, and Max replies that his mother Alice (Ally Walker) is going to marry her boyfriend Travis (John Costelloe) and he thought he’d never see him again because of it. Nick muses that he must have really thought he was something, but Max answers that he never knew what to think because he was never around. Nick tells Max that he still has a choice, and he shouldn’t aspire to be like him or live the life he leads because it is not idyllic and not a life you can just walk away from, and he lastly states that you don’t get any second chances in life. He orders Max to go, so Max gives him the tape and sadly pedals away on his bicycle. Nick gets the tape to Malik, but Malik then holds him captive in his office, for he has decided – since he has seen the surveillance tape of Kazaam and Max and has gotten his suspicions about Kazaam’s true identity confirmed – to use Nick to get to Max and thus Kazaam.

That night, Max approaches Kazaam in the nightclub while he is taking a break from a rap concert he is holding, and he states that he wants to use his final wish to give his father a second chance at life. Kazaam reminds him that that is an ethereal wish, which is something only a djinn can grant, and he can’t attain that state of being. Max accuses him of being unwilling to grant it because of him focusing on trying to be a rap star, and he runs off angry. Malik then comes up and distracts Kazaam while one of his goons makes off with his boom box. Max goes up to Nick’s office and finds him being held by a couple of Malik’s men, but when he complies with Nick’s demand to leave now, he is blocked by Malik, who is now holding the boom box. He orders Max to make his final wish so he can become Kazaam’s new master, and he threatens to kill Nick if he tries anything disagreeable. Nick soon fights back and orders Max to run, and he joins Max moments later while Max yells for Kazaam to appear. They run into the warehouse, during which Max sees Malik’s whole black market CD operation, but Malik and his men eventually recapture them. Nick is knocked out, bound, and gagged, and Malik sends Max down an elevator shaft to his death so he can be Kazaam’s new master that way. Max makes one final yell for Kazaam as he falls, and this pulls him from the stage and into the warehouse.

He is greeted by Malik and his thugs, and Malik orders him to get into the boom box. After seeing the goons lay down Nick’s unconscious body, Kazaam demands to know where Max is since he has to grant his last wish, but Malik replies that he won’t be doing so anymore and that he is his new master. Kazaam tries to grab Malik to get some answers out of him, but at first finds himself powerless to inflict any kind of violence on him. However, he manages to break free of his oppression and whup all of Malik’s thugs, but he accidentally starts a fire in the process. Malik gloats that he can’t hurt him because he is his master, but Kazaam destroys the boom box and declares that he will never be his slave. He then grabs him by the throat and forces him to tell him that Max was sent down the elevator shaft, then magically compacts his body into a basketball and slam dunks him down a garbage disposal chute. Meanwhile, firefighters arrive outside, as does Alice, and she finds out that Travis has already gone inside.

Kazaam approaches Max’s body and carries it back upstairs, and he tells Max that he was his only friend and he wasn’t there for him when he needed him the most. He adds that, even if he has to spend another 5,000 years in a lamp or otherwise, he wouldn’t care, and he wishes that he could’ve granted his last wish. Suddenly, a shining white light covers his body, and Max is miraculously restored to life because of it. After putting Max down, he grows large and starts to magically vanish in a golden light, and Max tells him he can’t go because he still has to make his third wish. Kazaam tells Max that he got his wish; a second chance for his father, and it was a perfect wish because it was a wish from his heart. He says that he is now a djinn and is also now free, and though Max begs him not to go, Kazaam replies that he doesn’t need him anymore. He then levitates Max into the arms of Travis, who carries him to safety and to Alice.

Moments later, Nick comes up to Max, and he says he has no recollection of how he got free or got out of the warehouse, but he did see Kazaam and he said something about a second chance. Nick tells Max that he is a good kid with a good heart, and though he first has to take care of some people he owes and answer for his crimes, he would like to spend some quality time with him when his business is settled. Max okays the idea, as does Alice, and Nick gives his thanks before being escorted away by a policeman. Max then decides to go home, and he asks Travis if he is coming, signifying that he is finally accepting him as a soon-to-be-stepfather.

While walking away, Max expresses a desire to have a cup of hot chocolate, and suddenly one appears in front of him. He then looks to his left and sees Kazaam walking away with Asia, and though she grills him over how he is unemployed, he is nonetheless happy to be a free being. 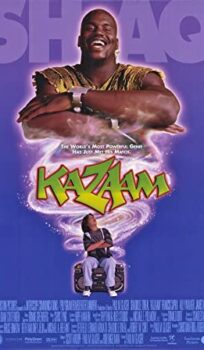