Private Kelly (Clint Eastwood), a member of the US Army’s 35th Infantry Division fighting near Nancy, France, captures a Nazi colonel who tells Kelly about a cache of gold in the nearby town of Clermont.  With their commanding officer away in Paris, Kelly and his rest of his platoon decide to sneak off to Clermont, which is 30 miles behind enemy lines, and steal the gold for themselves.  Kelly, along with the acting platoon leader Sergeant “Big Joe” (Telly Savalas), recruit several others to assist them in their plan, with the promise of a cut of the gold as their reward for participating.  These others include supply Sergeant “Crapgame” (Don Rickles), beatnik tank commander Oddball (Donald Sutherland), and about 100 other GIs.

Almost immediately, things start going bad.  Most of their equipment is accidentally destroyed via friendly fire from an overhead Allied fighter, fights with Nazi patrols are thinning their ranks, and their paths to Clermont are all being destroyed by Allied bombers.  In addition, intercepted radio transmissions are heard by a gung-ho General (Carroll O’Connor), who mis-interprets the raid as an unannounced invasion and orders his men to follow Kelly.  Kelly and his team are now forced to race to Clermont before their own army arrives to capture the gold before anyone else learns about it.

The team finally reaches Clermont and, with the help of Oddball’s Sherman tank, defeats most of the soldiers guarding the town and the bank where the gold is being stored.  However, the tank breaks down before they can destroy the last remaining Tiger tank and blow open the bank doors.  Kelly, Big Joe, and Oddball negotiate with the tank commander, promising him and his men some of the gold if they open the doors.  They agree, and the Tiger blasts open the bank doors.  Everyone on the team discovers the gold, and they quickly load it onto a nearby truck.  With the general and his men approaching town, the team convinces the townspeople (who are celebrating their liberation) that the general is actually Charles de Gaulle, and they stop the army from entering town by celebrating with them.  The general is more than happy to accept the credit for the liberation, while everyone who was recruited takes their share of the gold and leaves town.  The movie ends with Kelly and his platoon returning to their base with the gold, having gotten away with everything. 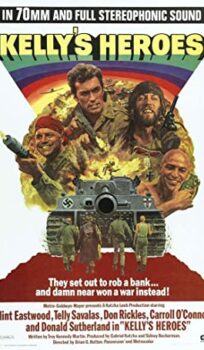