POOPER:
Chris D’Amico aka the motherfucker (Christopher Mintz Plasse) survives his fall but his leg is eaten by shark in the tank in which he landed in. Justice Forever that includes Kick Ass (Aaaron Taylor Johnson), Battle Guy (Clark Duke), Night Bitch (Lindy Booth), Ass Kicker (Augustus Prew), and Remember Tommy (Steven Mackintosh and Monica Dolan) decide to disband because of the fight that just transpired.

Mindy aka Hitgirl (Chloe Grace Moretz) decides to go on the run largely due the havoc that she has caused. Plus considering she killed Mother Russia (Olga Kurkulina).

MUCH LONGER VERSION:
After the events of the first film, Dave Lizewski (Aaron Taylor-Johnson), aka Kick-Ass, has inspired dozens of people to become heroes, and the police even seem to enjoy the help of these good samaritans. Meanwhile, Mindy Macready (Chloë Grace Moretz), aka Hit-Girl, continues to train herself and fight crime. She skips school to focus on training and fights crime in direct disobedience of her adoptive father’s orders (he knows she is Hit-Girl and knew her dad was Big Daddy). Meanwhile, Chris D’Amico (Christopher Mintz-Plasse) inherits his family’s sizable fortune when he accidentally kills his mother. In possession of almost unlimited resources, he decides to become a super-villain named the Motherfucker. With the help of his father-figure/bodyguard Javier (John Leguizamo), he forms a super-villain team that includes the almost indestructible and sadistic villain, Mother Russia (Olga Kurkulina).

Dave decides he wants to get back into the superhero game and asks Mindy to train him (this also causes Dave’s girlfriend from the first film to break up with him, thinking he is having sex with Mindy). The pair bond and Dave becomes slightly more competent. Eventually, Mindy’s adoptive dad discovers she has been blowing off school and orders her to retire her Hit-Girl persona and see what life is like as a normal girl. Mindy agrees and to her surprise, she is welcomed in to the cool-girl clique and makes the high school’s dance team.

Dave meets another hero named Dr. Gravity (Donald Faison) and begins patrolling the streets with him. Dr. Gravity tells Dave that an ex-mafia enforcer and born-again Christian who goes by the superhero name Col. Stars and Stripes (Jim Carrey) has formed a super hero team and wants Kick-Ass to join. Dave gladly accepts and undergoes more training with Col. Stars and Stripes. The other members of the group include Night-Bitch (Lindy Booth), who begins hooking up with Kick-Ass, Insect Man (Robert Emms), and a married couple whose son had been kidnapped. It turns out that another hero in the group named Battle Guy is actually one of Dave’s best friends named Marty (Clark Duke). The group do many acts of community service and also successfully take down a prostitution ring. Clark and Dave ask their other best friend Todd (Augustus Prew) to join them as a hero, but after he is unable to come up with a better super-hero identity than “Ass-Kicker” and donning a costume similar to Dave’s, Todd storms out to find a new group.

Meanwhile, it is revealed that the cool kids at school were simply feigning affection for Mindy and when she goes on her first-ever date, the girl’s clique and her date abandon her in the woods. Realizing she doesn’t want to fit in with them, she brings a “sick stick” (an electronic device that causes anyone hit with it to vomit and poop uncontrollably) to school and publicly hits the popular clique with it, thus destroying their status and getting herself disciplined.

In the meantime, Chris’ uncle murders Javier in an unsuccessful attempt to assert his dominance over Chris. This event causes Chris to decide that extreme violence is the only way to be taken seriously and he resolves to destroy Kick-Ass’s life. He begins by infiltrating the headquarters of Kick-Ass’s superhero group and having Mother Russia snap Col. Stars and Stripes’ neck before decapitating him (none of the other heroes were there at the time). He then discovers Night-Bitches’ identity and goes to her home where he attempts to rape her (but it turns out he is impotent). Instead, his group beats her nearly to death while Mother Russia single-handedly kills 10 cops who were called in by neighbors to help Night Bitch.

As a result of this, the police decide to arrest all costumed heroes. They track Kick-Ass’s webpage to his home, where Dave’s dad claims to be Kick-Ass to keep his son out of jail. Todd, who has joined the Motherfucker’s group without realizing that they are actually sadistic killers, tells Motherfucker that the guy arrested is actually Kick Ass’s dad. Motherfucker uses this info to have some goons who worked for his dad kill Dave’s dad in his cell. Dave’s dad’s funeral is attended by Mindy and the remaining members of the superhero group. While at the funeral, they are all attacked by the Motherfucker and his crew and Dave is abducted. Realizing that she loves being Hit-Girl and that she alone has the skills to take down Motherfucker once and for all, Mindy again takes up her Hit-Girl persona and saves Dave while killing many of Motherfucker’s men. Her adoptive dad accepts Mindy’s decision, though he is sad that she will forever be immersed in a life of violence and death.

Motherfucker turns his attention to New York City, deciding to set up bombs throughout Times Square and massacre the innocents. He hires dozens of hoodlums to join him. Before the villains can mobilize, Kick-Ass and Hit Girl arrive at Motherfucker’s headquarters, accompanied by the remaining members of Kick-Ass’s super hero group (including a recovered Night Bitch), Todd (who has realized Motherfucker’s true intentions and joined with Kick-Ass) and dozens of other heroes who responded to Kick-Ass’ Internet plea to face down Motherfucker. A big fight ensues. Hit-Girl goes after Mother Russia, but is no match. Mother Russia is about to snap Hit Girl’s neck, when she sees Hit Girl holding a syringe filled with fluid. Mistaking it for poison, Mother Russia injects it into Hit Girl. The syringe was actually full of adrenaline. The injection allows Hit Girl to summon the strength and speed necessary to kill Mother Russia, which she does by slashing and stabbing Mother Russia with various pieces of broken glass.

Motherfucker and Kick-Ass square off on the roof of the headquarters, and Kick-Ass gains the upper hand. Kick-Ass knocks Motherfucker to the ground, where he crashes through the skylight. Kick-Ass catches him, but Motherfucker wriggles out of Kick-Ass’s grasp, saying he wants to be an evil martyr. Motherfucker falls into a shark tank he bought earlier, and the hungry shark promptly eats him. The remaining villains surrender, though the victory is bittersweet as Kick-Ass and Hit Girl are now orphans due to their choices to be heroes. All the heroes decide to resign so as to never cause such madness ever again. Hit Girl is now a wanted felon, as she was the only hero to actually kill people rather than subdue them. Hit Girl drives Dave home and the two kiss (this is Mindy’s first kiss). She then drives off to begin the life of a fugitive, knowing she wants to be Hit Girl no matter the costs. Dave, decides he too wants to remain a super hero continues to train and we see he has begun building an armored Kick-Ass suit.

After the credits, we see Chris is still alive and is in the hospital, though the shark has eaten his legs and privates. 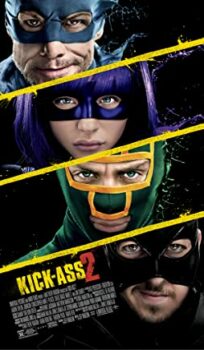